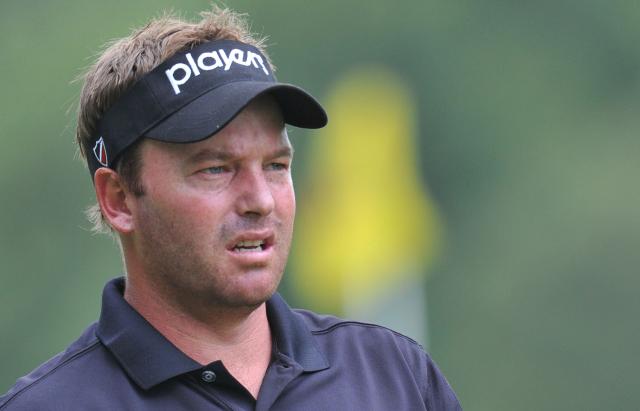 Stellenbosch pro Jean Hugo proved his class at chasing down overnight leader Peter Karmis with a fantastic final round performance at the Vodacom Origins of Golf at Simola Golf Estate.

Karmis teed off with an almost unassailable six-stroke lead, but as is often the case in golf, the man who dominated the tournament for the first 36 holes was beaten on final day by a player who had gone about his business quietly and efficiently before emerging from the chasing pack on the final day to steal victory.

Although Karmis birdied the second and seventh holes to dip to 15 under, Hugo stormed out of the gate with five birdies in the first six holes, including four consecutive out of the gate. He threw in an eagle at the seventh to turn in 29.

Hugo dropped a single shot at the 15th but finished with a birdie-birdie flourish for an eight-under-par 64 to tie Karmis, who shot a 70, on 15 under.

But it was a master class putt for birdie at the first extra hole that stunned Karmis into second place.

“I’m thrilled with this win, but I have to give credit to Pete because he is one gritty opponent,” said Hugo. “He gave everything in this round and he kept me on the back foot all the way. It was one of my toughest victories yet.”

Last year Hugo showed why Ernie Els has stated again and again that “Jean Hugo has more talent in his little finger than I have in my whole body” when he chased down Charl Schwartzel with a flawless 62 to win the Vodacom Origins at Gardener Ross.

This time, Hugo was on fire in what turned into a thrilling two horse race to the finish line.

Hugo got to within one shot through nine holes and Karmis cracked the door wide open when he pulled his tee shot on the par-four 10th. Sacrificing two shots, he gave Hugo a one shot edge. But after matching Hugo’s pars through 11, 12 and 13, Karmis levelled the score with back-to-back birdies at 14 and 15. He used a hybrid to drown a bump and run putt from the edge at the 14th green and hit the front at the next hole when Hugo fluffed his approach and over-clubbed, dropping into the back bunker.

“I blew the trap shot six feet past the hole and missed the uphill putt, but Pete laid up and he flew an exquisite little chip shot to three feet and nailed the downhill putt,” said Hugo. “Suddenly I was two shots down again and I knew I had to get birdies on the final three holes.”

Karmis held the advantage through 16th but another two shot swing ensued when Hugo made the first and only birdie on the day at the tough par-three 17th while Karmis dropped.

Both players birdied the 18th to square off at 15 under, but it was the second visit to the 18th green that produced the final blow when Hugo sunk an eight-footer to finish Karmis off.

“We both laid up and left our third shots about eight feet short of the hole,” explained Hugo. “Pete pushed his past the hole and I managed to steer mine in for the win.”

Gracious in defeat, Karmis said the charge from Hugo deserved the victory.

“I needed that birdie, but it turned out to be Jean’s day,” said Karmis. “The putter failed me at the wrong time, but if I have to be honest, I missed some crucial putts early in the round, too.

“I threw everything at him, but I couldn’t do anything to stop him,. He was brilliant with his irons, hitting it to five or six feet all day and sinking every putt he looked at. What do you do? Bottom line, the way he was playing today, it was his day to win and I’m truly thrilled for him.”

But Hugo didn’t have just Karmis to beat.

While the attention focussed around duelling pair in front, Free State’s Alex Haindl quietly moved through the field and finished with an eagle for an eight-under-par 64 to place third on 13-under-par.

Local favourite Branden Grace grinded to a share of eighth on six under with four birdies, three bogeys and an eagle for 69.