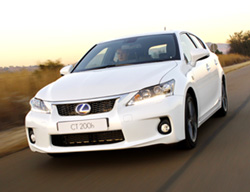 Lexus has added a premium hatch hybrid, the CT 200h, to its current South African three-model range and it describes the newcomer not as just another new model, but one that signals the start of a whole new trend.

The Japanese carmaker is quite clear about its target market – it sees this car as the brand’s first serious bid to attract younger customers to a brand which traditionally has appealed to the older, more conservative end of the market.

The suits at Lexus reckon the newcomer’s class and luxury finish, ride and handling qualities, its low fuel consumption and below tax emissions will appeal to young and discerning buyers who regard automotive eco-friendliness as a non-negotiable.

What makes the CT 200 stand out is the fact that it is the first full hybrid vehicle to enter the competitive world of the small luxury car segment. However, whether this is a sufficient enough of a come-on to entice its newly targeted audience remains to be seen.

Let’s just put things into perspective. For a start, the new hybrid is expensive, very expensive, with the lesser specced of the two variants kicking off at a steep R343 900. Sure the car is eco-friendly, but so is any one of a host of classy smaller diesel-engined cars on the market.

Toyota’s trend-setting Prius clocks in at R323 700 and it is powered by basically the same, ever so slightly less tweaked 1.8-litre engine as the one that does duty under the Lexus bonnet. In the Prius the normal engine produces 73kW and the electric motor makes 60kW. The Lexus engine version produces 77kW and the same 60kW from the electric motor as the Prius.

The torque of the Prius combination is identical to that of the Lexus – 142 Nm from the normal engine and 207Nm from the electric motor.

Interestingly, the clever sum-makers with the thick glasses and white coats guesstimate the Lexus’ combined kilowatt to be in the region of 100kW, yet Lexus admits they cannot come up with a total Newton metres count. The bottom line though is that 100kW is puny and is hardly going to set the market on fire or impress younger executive who enjoy letting their hair down every now and then.

At the media introduction I drove the new Lexus through the Northern suburbs of Cape Town, along stretches of highway and then over Chapman’s Peak to the city centre and yes, the car is comfortable and well finished and the ride quality is good, but when it comes to zip it certainly is no road rocket, even when you opt for Sport mode (which makes it a bit more acceptable but at the same cuts down some of the car’s greener qualities).

Clearly the Lexus team raided the Toyota spares bin for engine and gearbox bits and pieces (in fact, almost the whole engine), but they are quick to point out that the CT 200h is built on an entirely new platform, something which became quite evident on our launch drive.

The car’s cleverly engineered low centre of gravity, fairly rigid lightweight body shell and suspension tweaks move it quite few notches higher up the driving pleasure scale than the Prius. This is particularly noticeable when you click out of Eco mode into Sport mode. The suspension becomes tauter, the steering feels sharper and the power responses are sharper.

Although the Lexus CT 200h is a full hybrid said to be capable of running on its petrol engine or electric motor alone, we tried it by using only power from the electric motor but this ran out of go in only about 2km before handing over the baton to the normal engine.

Clearly Lexus makes much of the CT 200h’s class-leading emissions of just 94 g/km of CO2 and its 4.1 l/100km combined cycle fuel economy, but the best we could achieve, driving fairly conservatively but not setting out to win green stars, was 5.9 litres.

The hybrid Lexus can be driven in relaxed fashion or in a slightly peppier mood with a choice between for four modes: NORMAL, EV, ECO and SPORT with marked differences. For instance, with ECO mode selected throttle response is softened to create a relaxed classical music environment, probably best suited to congested traffic and maximum fuel efficiency. Soft blue instrument panel lighting adds to the ambience.

Click into SPORT mode and the dash lighting turns to red as the blue-lit hybrid power meter switches into a conventional rev counter. But although responses become quicker the overall SPORT performance is still far from pushing your heart-beat up and far away from leaving you breathless and white knuckled.

Official Lexus figures for the new hybrid claim a top speed of 180km/h and a 0-100km/h time of 9.8sec but on our launch drive the car felt as though it might become breathless trying to get there – and we were not even driving on the Reef

When it comes to a young audience appeal the new hybrid also hardly scores Brownie points with its Constantly Variable Transmission. Yes, we know it is a clever state of the art piece of engineering, designed to orchestrate petrol and electric power flows to optimise fuel efficiency. Smooth and probably highly effective it may well be but drearily, dull and droning at the same time. It certainly adds very little in terms of driving excitement, particularly if you enjoy a bit of rapid cog-swapping.

Another downside to the baby Lexus is its complete lack of towing ability with no facility or means of fixing a tow ball anywhere to the rear of the vehicle. Try getting that past the young trendies who would not dream of going out to play or go away on holiday without being able to take their jet-skit, quad-bike, boat, trailer or other big boy toy in tow.

Next up (and even more expensive!) is the CT 200 in F-Sport guise, differentiated by 17-inch alloy wheels, LED headlamps, a slightly bigger boot spoiler, sexier sports seats (the driver’s seat benefiting from being eight-way electrically adjustable), cruise control and performance dampers at all four corners.

For those with even more ching-ching flush the F-Sport can be ordered with a Convenience Package that includes an upgraded sound system with four additional speakers and an amplifier, smart entry, rain sensing wipers, a full colour monitor with HDD navigation and voice command with Remote Touch, and a reverse camera with back-guide monitor. A moon roof is also optional on the F-Sport model.

The optional extra packages add an interesting new dimension to Lexus brand marketing because the carmaker has always made much of how its vehicles are good enough in standard trim without having to offer optional extras, unlike brands such as Audi, BMW and Mercedes-Benz. Lexus says its change in direction is to give buyers a wider price option, although a number of motoring scribes felt a much better attraction would have been to reduce the initial purchase price of the car which is more than R100 000 higher than it sells for in the USA.

Lexus has staked its claim to being one of the safest cars on the road and the new CT 200h is no exception with its five-star EuroNCAP rating, thanks to features such as eight airbags (including knee bags for driver and front seat passenger), ABS with EBD and Brake Assist, Vehicle Stability Control, Traction Control, ISO-Fix anchors in the rear and child locks on the rear doors, along with a front passenger airbag deactivation switch that ensures safety for younger occupants. Even the rear seats are included in the seatbelt warning system.

Overall, in terms of design, ride quality, finish, safety, comfort and growing brand status this smart hybrid cannot really be faulted. It is a true blue-blooded Lexus, but whether buyers will be prepared to sooth their planet-saving conscience by taking the pain of its high purchase price and be content to put up with its boring CVT transmission and rather average performance only time will tell.