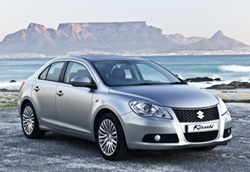 Suzuki has muscled its way back into the local car market since its return to this country three years ago with seven new vehicles, a strong and expanding dealer network and a rapidly growing reputation for solid, value-for-money wheels — and now it has also taken its first brave steps into the medium-sized car market with its new four-door Kizashi sedan.

And brave it is indeed for any newcomer to venture into a battlefield dominated by German veterans such as Audi, BMW, Volkswagen and Mercedes-Benz which already has a pack of market-hungry predators such as Toyota, Volvo, Hyundai, Mazda and Honda yapping at their heels.

But then the Japanese carmaker is not scared of a fight, as it has proved over and over with its small car foot soldiers Alto and Swift backed by the rugged Jimny off-roader and Grand Vitara and SX4 classy dirt trackers.

Having said that, Suzuki now moves into the toughest segment of the market where crucial elements such as class, comfort, safety, fancy features, handling and brand image all carry lots of weight when price comparisons and overall evaluations are made.

So, what does the new Kizashi bring to the medium car party?

In terms of looks it has a rear end that will do a swimsuit model proud, but the rest is very much cast in the same mould as opposition cars from the stables of Volvo, Merc, Audi, BMW, Hyundai, Honda….in other words, nothing wildly exciting.

It has a rather stocky, squat crouch which is not unattractive. It looks quite business-like, but the message leans more towards commuter and family transport than zippy performance, trend-setting styling and excitement.

The interior, too, is rather bland, almost predictable in a Toyota-Volkswagen-Volvo sort of way with the same black backgrounds and silver knobs, dials and gauges that are so typical of most cars in this market segment.

The all-leather seating adds a touch of class but this is rather spoilt by the moulded front seats which feel as though they were designed for small Japanese men rather than their broader-bottomed South African counterparts from Mars.

But, in their favour, the driver’s seat has electrical 10-way adjustment and a three-position memory and the front passenger offers a four-way adjustment choice.

The sporty three-spoke leather-trimmed steering wheel is armed with switches to adjust the audio system, set the cruise control and for scanning the information display that includes instant and average fuel consumption, fuel tank range and average speed, a low fuel warning and even a battery replacement reminder for the remote key fob.

The audio system, including FM/AM radio, CD and MP3 playback functions, was custom-designed for the Kizashi, and features seven speakers and a subwoofer, as well as a USB port for iPod connection. Dual-zone climate control air conditioning is a standard feature.

Other cabin comforts include electric windows all round with one-touch operating function, clever enough not to pinch pikkie fingers if they are caught in the window!

The cabin certainly doesn’t suffer from a shortage of storage space with mousey holes for in the shape of an illuminated glove box, a double-layer compartment under the centre-console armrest and an instrument-panel centre box that’s ideal for an iPod, as it also houses the USB port and power socket. There is even a special slot for your fashionable shades.

Some to woof about

Certainly one of the most impressive features of the Kazashi’s living quarters is its custom-built seven-speaker and subwoofer sound system which provides FM/AM radio choices, CD and MP3 playback functions, and a USB port for iPod connection.

The rear bench seat is split 60:40 which offers an extension to an already fairly generous 461-litre boot space.

Marketing yada-yada says the Kizashi “combines the best of European-style design with Japanese craftsmanship” and if that means that the bonnet looks like that of a Honda Accord and the side profile a bit like a Volkswagen Passat, then that is probably a fairly apt description.

The Kizashi comes to the market with only two models, both powered by a tweaked version of the same twin-cam, 2.4-litre petrol engine that already does duty under the hood of the Grand Vitara.

The only difference between the two models on offer is the choice of transmissions between a six-speed manual and an automatic-style CVT set-up.

At the local media launch I had the wheel of both versions along the truck-crowded, pot-holed roads of small-town, rural Gauteng and my choice was easy; the manual version was the clear winner. Clicking through its short-throw, silky smooth cog box was pure pleasure and it just has to be one of the nicest transmissions I have played with in a long time.

Where are the ear plugs

The CVT was plain awful, but then I do have to confess to more than a modicum of anti-CVT sentiment, something generally shared by the majority of other motoring scribes and by a fair slice of the new-car buyers market too, judging by the sales figures. Of course a CVT system is convenient and smooth, but jeez that constant swarm-of-honey-bees-on-steroid drone is enough to turn even a short commute into a wish for ear plugs.

Granted, the CVT of the Suzuki feels way ahead sportier than most of the others I have experienced although it does make the car slower off the mark and less athletic at top speed than its sister model. The manual does 0-100km/h in 7.8 seconds and has a top speed of 215km/h against the CVT model’s time of 8.8 seconds over the same sprint and a top speed of 205km/h.

The CVT has several control modes which are automatically activated according to driving conditions and it varies from Normal, which keeps speeds at the optimal level for fuel efficiency; a Start mode, which maintains lower gear ratios for strong off-the-line acceleration; an Acceleration mode, which delivers linear acceleration and a Downhill mode, which provides engine braking.

A pat on the transmission case of the CVT – it’s clever and smooth enough not to impose its presence too much. Daily heavy traffic sufferers will no doubt opt for this model which removes much of the stop-start, shift and brake frustrations of commuting, particularly in choking Gauteng congestion.

Maximum power of 131kW kicks in at 6500r/min with the torque peaking at 4000r/min. Although optimum performance comes at fairly high revs the new flagship’s consumption figures are impressive, even after the engine has been given a small extra spoon of go-quicker tonic. Suzuki’s official combined-cycle fuel consumption figure is 7.9 litres/100km with CO2 emissions rate also well down at 183g/km.

Out on the road both versions were remarkably quiet and Suzuki proudly boats of the special efforts that have gone into isolating the cabin from engine, wind and road noises through the extensive use of top-quality insulating materials and seals, as well as employing a balanced shaft, acoustically tuned manifold passages and dual high-capacity exhaust silencers.

All of this brings us nicely to what the car feels like out on the road, particularly when the going becomes a touch lead-footed. And the quick answer is good, really good…

The Kizashi handles well. The steering is well-weighted. The suspension is tautish, but not so that it becomes uncomfortable. Turn in is fairly direct and the car’s poise is more than adequate for a four-seater sedan of this nature.

The body is fairly rigid and well-matched by the McPherson struts up front. Noise and comfort levels are enhanced by floating suspension mounts and a stabiliser joint on the strut assembly.

The multi-link rear suspension contributes to a lower centre of gravity and aerodynamic efficiency is boosted by smooth surface plastic cladding to the car’s entire under-floor area.

The Kizashi sits confidently on the roads, even when the going gets a little rough and throw-about to avoid the numerous – and often dangerously ugly – potholes which have become regular features on most South African roads.

The all-disc Akebono brakes are superb, perhaps even a tad over-enthusiastic until you get the squeeze pressure right, but they are, after all, produced by the same company that supplies the braking system for the famous Shinkansen Bullet Train!

As with all cars in this segment of the market the new Suzuki sedan brims with safety features that include a light, energy-absorbing body, a deformation-resisting cabin, three-point seatbelts with pre-tensioners and force limiters, an anti-lock braking system (ABS) with front and rear discs, electronic brake force distribution (EBD), electronic stability control (ESP) with traction control and six airbags (including head protecting side curtain airbags).

Kizashi is Japanese for ‘something great is coming’ – a fair, if slightly rose-tinted view of a car that breaks new ground for the Suzuki marque and underlines its intention to expand its automotive horizons beyond the compact car segments which have been its home-grounds to date.

Certainly the newcomer impresses with its ride comfort, honest handling, superb brakes, extensive safety features, driver aids, creature comforts, solid overall feel and more cosmopolitan looks, BUT it has a major fight on its hands and even its own initial low sales target of 40 a month might be difficult to attain in the immediate future in spite of being competitively priced at R295 900 for the 2.4 SLX Manual and R310 900 for the 2.4 SLX CVT.

To be honest the Kizashi would not be a natural first choice in this segment but it has a kind of quiet, low key presence and reserve that has potential to grow on one. Internationally it has had a fairly enthusiastic market welcome and it certainly will be interesting to see how the local market responds to this new Suzi sedan.