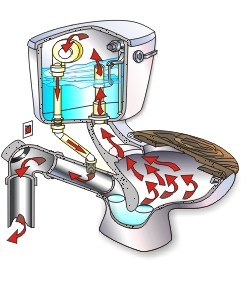 Clients often enquire about the effectiveness of our Toilet Friend Odour Removal System, with special reference to the volume of air it actually draws from the washroom or toilet cubicle. Building regulations in our country, as per Act 103 of 1977, clearly suggest that the desired volume of fresh-air supply to a room be at 25 liters per second. This is also the minimum suggested requirement in respect of rooms without windows – toilet cubicles often fall in this category.

The “open-window” practice is more often the method applied to allow for the fresh-air circulation in a room to be compliant, to some extent, with the minimum suggested requirements of the Act. But the Act also refers to “alternative methods” to be used to make a washroom or cubicle compliant with the requirements. It is especially here that our product far outperforms most of the products which have saturated the diverse markets in which we operate.

While extractor fans of various shapes and sizes and strengths all contribute towards being some form of “alternative” to fresh-air supply/circulation in a cubicle, it does not always represent itself as an effective alternative towards both fresh-air circulation AND odour removal – the Toilet Friend System does both very effectively as an alternative as suggested by the minimum requirements of the Act.

Our extractor fan used is one of the best available in the world for the purpose for which we use it. It has the capacity to extract the air at up to 52 liters per second – more than double what the minimum suggested requirements are! All our international certifications confirm just how effective our product really is – the ITACS (International Testing and Certification Accreditation), the Test Africa certification (which is equal to our SABS and EC Declaration of Conformity Council Directive 73/23/EC), provided us with certification according to both IEC 60065:2001 (electronic) and SANS 60065:2003 (safety).

The Toilet Friend Odour Removal System plays an effective role in washroom hygiene and also, it is a very effective alternative to providing fresh-air flow in a washroom or toilet cubicle.