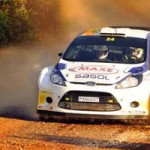 The Garden Route Rally, round six of the eight-event South African Rally Championship, takes place between George and Knysna this weekend and sees national championship motorsport return to the region for the first time in some 17 years.

The rally will start from the new Garden Route Mall near George airport at 12:00 on Friday 26 August. The first day will consist of four gravel special stages, three of which will be in the Outeniqua forests, and a short tar stage at the overnight stop in Knysna.

Saturday’s action starts at 08:00 from Simola Estate in Knysna and the route will include a repeat of Friday’s three forest special stages plus an additional forest stage that will be run twice. The total distance of the 10 stages is 170 km.

“This is the second all-new event in this year’s championship and I think the competitors will find this one particularly interesting,” said route director Joe Fourie. “The last time we rallied in this area was in the Volkswagen Rally in the early 1990s, when we started in George and finished in Port Elizabeth. The roads we have selected for the special stages will be completely new to the competitors and the whole event should be quite unlike anything they’ve experienced before. Although we had to change some of the route as a result of heavy rains in the area, it’s all looking good for the weekend.”

A strong 18-car field will do battle in the premier Super 2000 class for four-wheel-drive cars and is headed by current overall and Super 2000 drivers’ championship leader Conrad Rautenbach of Zimbabwe. He will again be accompanied by French co-driver Nicholas Klinger, who does not score points because he competes with a French licence.

A total of 11 competitors will contest the newly-named Two-Wheel-Drive Championship (previously known as the Junior Championship) for Super 1600 and Super 1400 cars. Heading the entries are Super 1600 and overall Two-Wheel-Drive Championship leaders Craig Trott and Robbie Coetzee (Total Toyota RunX). Leading the Super 1400 class are the all-woman crew of Megan Verlaque and Lirene du Plessis (BP VW Polo) with Megan partnered on this event by Hilton Auffray.