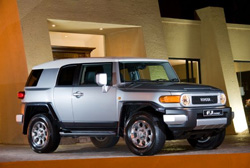 You might well ask who zapped the Hummer with a shrink ray, or whether it is a new Tonka toy on steroids because both are fairly apt descriptions of Toyota’s new funky-chunky FJ Cruiser which has just arrived in South Africa.

But don’t be misled by its looks. This is not just another pavement parker for the trendy restaurant crowd. It’s actually a damn fine reincarnation of Toyota’s legendary F40 which earned its kudos and iconic status as the conqueror of Africa way back in the sixties.

Sure, it dances to the same blinged up retro tune which saw the revival of the Mini and the VW Beetle, but the new Cruiser is far from just being a reborn pose-mobile.

Unlike its predecessor it’s actually very comfortable, fairly quick off the mark, holds the road fairly well and is kitted out with many wall-to-wall safety features and nifty extras. What’s more, it is going to sell in big numbers in spite of its rather steep price tag because it brims with Cruiser DNA from its bull bar to the big old spare-wheel stuck on its tail end.

Something old, something new

Sentiment will play a key role, for sure, and particularly the old guard will get quite emotional just at the sight of the old familiar, classic ‘Toyota’ name stuck on the straight mesh grille (instead of the ‘more modern’ Toyota badge), to say nothing of the traditional white roof, big round headlights, chunky mudguards, high mounted air intake and almost vertical windscreen.

However, although the wheel arches are still squared off a la Tonka toy the new go-anywhere cruiser has nice new trendy touches such as the handles of the rear doors being hidden in the frame of the two large front doors. So, four door practicality with two-door style…

Integrated side steps and grab handles make getting in and out of the FJ relatively easy, even for grandpa.

The living quarters are also quite comfortable, although space in the rear is still a tad cramped, although most serious bush dwellers seldom travel more than two up in any case. The rear seats fold flat to create more than enough space for beer and gear as you head for the Richtersveld.

The dash is familiar Land Cruiser style, but jazzed up with body colour and silver highlights. The aircon works well except for the central vents which we couldn’t close.

Clever out of Africa touches are thick rubber floor coating, water repellent seat cloth and a non-sliding mat in the front console. The back seats and luggage area has a durable plastic coating which makes cleaning a doddle. The back seats can also be removed if more beer and firewood space is required.

Other welcome additions to the FJ’s interior are an eight-way adjustable driver’s seat, electric windows, cruise control, a leather covered steering wheel with switches for the audio system, an integrated audio/CD sound system with six speakers including a trod-mounted speaker and an iPod, external audio and USB connectors.

Parking the FJ Cruiser is made easier by a rear facing video camera and video screen integrated into the internal rear-view mirror because, true to tradition, the front and rear views are fairly restricted because of the narrow windows.

Bushwhackers will be pleased to hear that a lot of thought has also gone into passenger safety which includes strengthening the chassis and body shell and the fitment of six airbags (two in front, two for side impacts for front passengers and two full length curtain bags). ISOfix seat fittings for the lil’ uns are also standard.

Bit nicest of all is the powerful 4.0-litre six cylinder power plant under the hood which is the same workhorse that does duty in the Prado and Fortuner. It effortlessly thunders out 200kW and 380Nm although both forces require fairly high revs – and we all know what THAT does to fuel consumption!

I got to try out the new FJ on a seriously rocky trail at Thaba Nkwe (‘Mountain of the Tiger’) in the Cradle of Mankind area and yes, it is a seriously impressive rock rabbit.

Power is normally fed to the rear wheels, sadly only via a five-speed automatic transmission (no manual or diesel is available). However, the auto box is equipped with AI Shift control with Flex Lock-Up, which measures road conditions, power requirements and driver inputs to adjust gear selection and gear changes, but still gives the driver the choice of choosing 4×2, 4×4 high or 4×4 low ranges.

Unfortunately this system is a bit ye olde worlde-ish and even sentiment won’t soften the criticism that it could have been made much more user friendly because it does require a lot of fiddling, unlike that of the (ouch!) Land Rover, for example, which is just a simple click-click and away you go.

However, it doesn’t take too long to get the basics right and then the FJ shows you exactly what it can do – and there is not much it cannot do or places it cannot go. It may look a touch soft, dressed in its show-off city garb but when it gets to work it is a bush fighter second to none. Sand, rocks, loose gravel, steep inclines, ugly nose-downs…nothing scares this chunk of metal.

The route we travelled was tough. Even the dirt trackers with big reputations will break out in a little sweat on this terrain but the FJ never stopped smiling.

The heavy duty suspension offers double wishbones in front and four link suspension with lateral rods in the back. Stabiliser bars are fitted on both axles.

The FJ rides on double wishbones in front and four link suspension with lateral rods in the back, helped by stabiliser bars on both axles, plus 17-inch rubber which gives it a ground clearance of 245mm, the best in the Land Cruiser range. The short overhangs further allows for an approach angle of 34º, a break over angle of 29º and a departure angle of an equally impressive 30º.

Go rovin’ in your Raven Black

The FJ Cruiser has been launched in four flavours, with two versions only available in limited numbers. Buyers can choose the standard model in Ivory White, Grey Metallic, Raven Black, Drakensberg, Sandstorm, Tidal Blue and soon in all Red.

The Base model is distinguished by its black radiator grille, fabric seat covers and silver front bumper section. Expedition specialists will be happy with this one as it offers all of the creature comforts while also offering ample opportunity for add-ons. This model sells for R435 500.

The FJ Sport Cruiser version is dressed in Raven Black and lots of extra chrome on the high mounted air intake, door scuff plates, full wheel cover on the back door and leather seat trim. More chrome décor brightens up the door handles, side mirrors, bumpers and radiator trim. A set of Sport-badges rounds off this limited numbers version which will set you back a tidy R457 300.

The Desert Cruiser is equipped with a nudge bar with integrated driving lamps, a full set of all weather carpets, rock rails, tow bar and unique Desert badges. It is only available in Sandstorm colour and will burn a R450 400 hole in your bank account.

Limited numbers of the Trail and Desert versions are available at launch, but the Toyota dealer network will also offer a wide range of optional extras for customers who want to bling up their wheels.

The marketing suits expect a strong initial rush for the FJ Cruiser and for sales figures then to settle around 120 a month which, by general consensus, could be a little short of the eventual mark – for this vehicle has iconic cult status flashing in neon lights, in spite of lifted eye-brows over its non-manual, non-diesel offering, not too modern transmission set-up, heavy fuel consumption and rather painful price tags.

Judging by the admiring glances and the number of loving looks and cell phone photie-taking by the ladies on the Sandton and motorway portions of our launch drive I reckon the guys had better get into the dealer queues quickly before the yummy mummies, estate agents and power dressers haul out their credit cards and beat them to it.