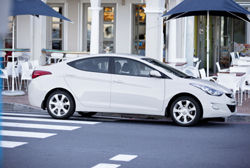 The Hyundai Elantra badge tends generally to conjure up an image of a rather boring, soulless car one would expect to find in car rental company fleets – certainly not the kind of wheels that could ever be described as stylish or classy, let alone sexy or desirable.

Well, the South African car market is in for quite a surprise because the latest Elantra which has just rolled into the local Hyundai dealer showrooms is cubic zirconia turned blue-white diamond.

Gone is the ugly duckling which has been around since 2006. In its place is a car startling and classy enough to give just about every other competitor in this class a wake-up call. And we are talking smart soldiers here, including the likes of Toyota Corolla, Honda Civic and Ballade, Mitsubishi Lancer, Chevrolet Cruze and Ford Focus.

Yep, that’s how good the new Elantra is. For not only is it strikingly handsome, it also has the kind of magic carpet ride that one would expect to find in much more expensive cars. What’s more, it brims with classy features, the car’s build quality is premium, it hugs the tar with amazing confidence, the transmission is as slick as Irish coffee and the steering is probably the best weighted of any Hyundai to date.

Now, for the first time, Hyundai can compete with a serious contender in the growing B-small segment and, typical of the Koreans, the Elantra’s competitive pricing and warranties are also impressive enough to make opposition car salesmen weep.

There will also be even more gnashing of teeth when prospective buyers start comparing the Elantra’s standard features with what it would cost to add those to any of its competitors.

The most appealing feature of the new Elantra is undoubtedly its suave European-styled looks. Here, for the first time, is a Hyundai in the B-small segment you want to touch, get into and drive, a car you would be happy to park in your driveway, whether you are a few rungs up on the executive ladder, part of a young family or a time-rich empty-nester with an appreciation for good value for money.

The Elantra is longer, lower and the cabin space has been pleasantly enlarged compared to the previous ho-hum model. It takes its design cues from its larger new Sonata sibling with elegant contours, chiselled wheel arches, stylish sloping roof, sparkling alloys, aggro-snazzy headlight clusters and a nose grill that gives it a rather distinctive kerbside presence.

The enlarged living quarters are equally impressive with handsome metallic and black two-tone finishes on the dash, doors, centre consoles and steering wheel (with a whole range of adjustment buttons), futuristic lay-out, stubby gear lever, comfortable seating for four adults, dual aircon, electric mirrors and windows and a smart sound system. The rear seats offer 60:40 split and the standard luggage space of 420 litres increases to 485 litres with the back seats folded down.

The Elantra also surprises with a raft of advanced features not generally found on other compacts, including ‘see you home safely’ headlamps that remain turned on for 30 seconds after the driver leaves the car, an auto defogging system and rear parking assistance sensors on the flagship models.

It also is far from shy with safety features that include six airbags (in the flagships) and ultra-high tensile steel reinforcement of safety-critical areas of the car’s body structure. ABS brakes with electronic brake-force distribution are also standard kit.

The small engine produces 96kW and 157Nm of torque which is good enough for 200 km/h but frugal enough to sip only 6.1 litres per 100 km in the combined circle with emissions down to a combined cycle figure of 145g/km.

At the new Elantra launch in Cape Town Hyundai only offered drives in the two 1.8-litre variants which churn out 110kW and 178Nm for a claimed top speed of just over 200 km/h and a 0-100 km/h sprint time of 9.3 seconds for the manual and 10.2 seconds for the automatic.

The anoraks will no doubt be interested to hear that the new engine, which replaces the earlier 2.0-litre Beta engine, is smaller, lighter, more powerful and more economical than its predecessor. Hyundai sales staff will be happy to expand on other new features and benefits of Dual Continuously Variable Valve Timing (D-CVVT) camshafts and hydraulic engine mounts.

Impressive in the twisties

On the launch drive fromCape Town along one of the most beautiful coastal drives in the world to Rooi Els I had ample opportunity to get the feel of the manual version.

The new Elantra clings impressively in the twisties, the steering is nicely weighted and not nearly as cotton-wool wrapped as some other electrically-driven set-ups; not quite pin sharp, but a lot more than just capable for a vehicle in this class.

The brakes are seriously good and the ride is comfortable and firm without waddle or jumpy taut. The only irritation was an occasional hollow thumping from the car’s nether regions which I suspect is mainly to blame on the brand of standard tyres fitted to the car. For the rest of it the Elantra is exceptionally well isolated from road, wind and engine noises.

Progress is brisk without being startling although you do need to keep the revs fairly high if you want to move fairly rapidly through the gears. However, as a comfortable cruising four-door family saloon it does a grand job.

I didn’t get to drive the automatic version but the manual was a slick act – one of those boxes where you only need to grip the gear-lever with two fingers, it’s that smooth and positive. Even rapid down changes are smooth and easy thanks to clearly defined gating.

In cruise mode, even on this country’s rapidly deteriorating roads, the new Elantra exudes quality. It feels and handles as good as it looks and it certainly drew enough admiring glances on our drive.

My co-driver and I scored the car above average in more than 90% of the standard evaluation zones and we agreed that at least one important Japanese player in this segment should be sleeping with one eye open because the Elantra brings to the party what Heinrich Brüssow and Bismarck du Plessis inject into the newly-elected Springbok world cup squad.

The new Elantra was introduced for the first time in Koreain 2010, selling nearly 77 000 units there in its first year. Since then it has also been launched in several overseas markets and so well has it been received, Hyundai expects to sell 400 000 units worldwide annually from 2012.

Locally, Hyundai South Africa is targeting a kick-off sales figure of between 500 and 600 units a month which should be comfortably do-able seeing that the Elantra now steps up to the podium as a premium vehicle offering luxury, quality, safety, excellent ride and damn fine looks at a highly-competitive price. Anyone looking at a new set of wheels in this price range would be silly to ignore it.

The new models and prices are:

All models come with a five-year/150 000km manufacturer’s warranty, roadside assistance for the same time and distance period, as well as a five-year/90 000km service plan. Service intervals are 15 000km.