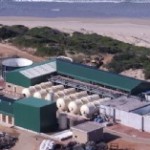 These involved the casting of the 300 concrete weight collars for Mossel Bay’s new desalination plant and supplying 7 000sq m of concrete block paving for the parking lot of the newly extended Knysna Mall.

“However, the common factor linking the two orders were extremely tight production schedules. Both sets of products were manufactured at our production facility at Great Brak River, situated between George and Mossel Bay,” says van Zyl.

The concrete weight collars each weighed between 1.3 and 2.7 tons and were produced to a strength rating of 40MPa, which is suitable for extreme marine conditions.

Van Zyl says steel reinforcing on the collars was complex and the real challenge was maintaining concrete cover during casting.

“The finished product required a tolerance of 0 – 3mm on the collars’ inner radii. Mobicast used self-compacting concrete which was poured very carefully to achieve the desired quality. Despite this the project was completed well within the required schedule.”

Approximately half of the Knysna Mall parking area was paved with Smartstone’s 50mm Paduan paver (Mobicast is SmartStone’s franchisee in the Southern Cape); and the other half was covered with a new Mobicast 150 x 150 x 73mm cobble stone paver with a very smooth ‘natural stone’ finish.

“The development work on the cobble stones took a considerable amount of lead time; for instance we had to make up special moulds and this placed our production facility under tremendous pressure. To meet our deadlines, we switched our cobble stone production plant to a 24-7 production basis and used steam curing as well. This enabled the moulds to be stripped every six hours. Needles to say, the project was completed on time at very high quality standards,” as reported to Precast, the official journal of the CMA.