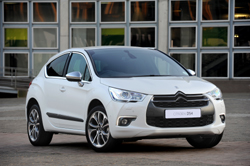 The French make great sauces because they discovered a long time ago that it needs a careful blending of a number of ingredients to get it just right – and this is precisely what Citroen did when they created a winning recipe called DS4.
It no doubt took many long ponderings of over sips of pastis to get the recipe just right: a few spoonfuls of hatch-back, a good dollop of stylish coupé and a few generous scoops of SUV and voilà, a new creation that has taken the automotive world by storm.

Quite rightly so too, because although the above automotive concoction is not an entirely new concept, the clever white coats from the land of croissants have really found extra flavours for their Citroen recipe which others seem to lack. With the birth of the DS4, the French carmaker has created a near-perfect mix of haute couture and designer stubble, a car with equal appeal for boys and girls – a chunk of gleaming French machinery that will look good in any golf club car park, on the yummy-mummy school run and at the pony club alongside the Range Rovers, Beemers and Mercs of the prissy set.

The girls will love it

And, with all its show-off features and international acclaim, it will feel right at home in the finest wheels company. The girls are simply going to love its mood-changing interior lighting, baby-soft leather seats which can be clicked on to warm bottoms and give caressing back massages, its super sound system and its cocoon of protective safety equipment whereas the species from Mars will get their kicks from the SUV-style “look-at-me” high driving position, the team of enthusiastic wild horses under the DS4’s bonnet, the car’s superior brakes and its amazingly confident, quiet ride plus its host of fancy connectivity jig-ama-jiggery.

The arrival of the DS4 follows hard on the heels of the DS3 which became an immediate hit in South Africa last year and was so impressive that it even became a finalist in the SA Guild of Motoring Journalists’ Car of the Year contest.

Petrol heads will recall the acclaimed DS19 which hit world headlines when it was first unveiled in 1955 at the Paris Motor Show, selling 32 units on the very first day! From there the DS19 went on to break many sales records and collecting trophies, awards and worldwide praise until its production ran out in 1975. To this day it is recognised as one of the icons of automotive history.

What made that new DS nomenclature so desirable was its off-the-wall design and a horde of technological innovations that were way ahead of their time – a combination that today’s suits at Citroen believe lives on in the new DS4 which has just been unwrapped in South Africa. And they are not too far off because in terms of styling the DS4 certainly stands out in any parking lot thanks mainly to its sleek lines and hidden rear doors which go a long way to creating the impression that it could almost be a two-door coupé.

But the Citroen not only has a snazzy exterior. Slide into the cabin and you will find superior craftsmanship, elegant chrome touches, acres of elegant glass, comfortable upmarket seating for five, a spacious luggage compartment of 370 litres and lots more. In fact, enough for the DS4 to also rope in the title of Most Beautiful Interior.

The DS4 certainly has an aura of blue blood about it, from the eye-catching LED day-time running lights, tinted windows, bulging wheel arches and big alloys to its integrated spoiler and chrome rear bumper. The elegance continues inside with a clean, ultra-modern, chrome-encased gauges lay-out, embossed door handles, racing-style pedals and cheeky-stubby gear lever.

Over and above all the usual things one would expect to find in an award-winning car, the new Citroen has a range of additional fancy stuff, some of it standard, others costing a-plenty, such as a choice of three leather combinations, including a two-tone option and a “bracelet” design on the seats that resemble the links on the strap of an expensive watch.

The DS4 also brags with safety features seldom found in this vehicle category, although some of them are optional extras. These include blind spot and tyre pressure monitoring, static cornering lights, dual-function xenon steering lights that can turn in coners, intelligent traction control, hill assist, a programmable cruise control, speed limiter, a parking space gap measurement system and an electric safety brake.

Fortunately most of the fancy features are standard so choosing the right version to suit your taste and pocket is relatively easy, that is once you have decided on your choice of engine and style packaging.

Engine options are two 1.6 petrol engines (yep, the same basic engine developed with the BMW group) one of which is a normally aspirated VTi which develops 88kW, and the other is a more expensive, stepped-up, turbocharged version that blows out a healthy 147kW.

Diesel fans have only one choice. It’s called the HDi 160 Sport and it kicks out 120kW and a robust 340Nm of torque.

The less powerful VTi 120 models have a five-speed manual gearbox and the gutsier petrol as well as the diesel variant are linked to a six-speed manual.

Ablity to cope with robust treatment

At the media launch drive in Gauteng I drove the more powerful of the two petrol-engined models, the THP 200 Sport as well as the HDi 160 Sport oil-burner, and I was impressed by their smooth and quiet running, interior comfort and craftmanship, chirpy performance, nicely-weighted steering and exceptional brakes.

The THP 200 Sport has a pleasant inclination to trot, once you get the whip out and the revs up, whilst the diesel’s amazing low-down punch felt powerful enough to haul the Blue Train through the Karoo.

We drove the vehicles in the by-now familiar, pot-holed Cradle of Mankind region, along motorways and through built-up urban jungles which really didn’t pose a challenge to the car’s dynamics so I am looking forward to spending a bit more time with it at a later stage when I can point a DS4 in the direction of a more challenging route such as the lovely coastal run between Gordon’s Bay and Hermanus or over the Franschhoek Pass. Both cars certainly felt as though they could cope with a healthy helping of robust treatment without losing their composure.

Although not much of a diesel fan, I preferred the HDi variant to the petrol model, the main reason being the THP 200’s inclination to slumber on after you have stomped down on the go-faster pedal. In fact, it is so slow to respond to a leather-soled demand for speed that it became a bit of a joke amongst our group of motoring scribes after someone remarked that it felt as though the accelerator was composing a text message to the car’s brain requesting approval before the speed was increased.

Not your average sun-bronzed Clifton blonde

Other than the rather relaxed take-off by the petrol flagship, both DS4’s lived up to the brand’s rapidly-growing reputation for unusual styling and drive superiority. However, although both the higher-echelon vehicles were seriously impressive and their manual transmissions were as sexily smooth as French underwear, this new Citroen is the kind of city-chic vehicle that could do with an automatic transmission option which, unfortunately, is not available locally.

On the more painful side, the DS4’s models on offer don’t exactly wear budget price tags, although in this instance the premium fares could probably be justified to a large extent by their à la mode potential… One thing is sure – the elegant DS4 badge does stand for something out of the ordinary, perhaps not quite so that people will go weak in the knees or faint when they see it drive by…more like an elegant, attractive and immaculately attired French uppercrust lady, rather than a sun-bronzed Clifton blonde in a tanga.

The models and prices are: