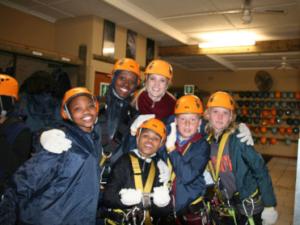 LAZOLA Dabula, who was earlier this year named as the first black female student to receive a BTech degree in Video Technology at Durban University of Technology, has landed her dream job.

She is the presenter and assistant editor of a new television reality show, Roughing It Out, which is scheduled to debut on SABC2 at 4.30pm on Monday. The show will fill this weekly 30-minute slot for 26 weeks.

Shoots for 12 of the episodes were completed in July.

“Lazola will now be based inCape Town, as the bulk of the show is being recorded in theWestern Cape. Some of the episodes have been shot as far afield as theGarden Routeand Central Karoo in theEastern Cape,” says a spokesman.

Roughing It Out has been described as a children’s outdoor reality show and its aim is to educate youngsters about the environment and nature conservation.

Children ranging in age from 10 to 13 embark on challenges, so that they are able to survive independently in the wild. They are expected to build their own shelter, make a fire and cook food. This involves eight children split into two teams of four. The best group wins a prize.

After having been successfully auditioned in June, she is excited that she has now reached that point in her life when she is gladly taking up the challenge.

“It’s a big start and a huge step. It’s really a good show and it’s going to be full of fun,” she says, adding that the programme is the first local outdoor children’s reality show targeted at environmental awareness.

The programme is filmed by Insync Productions and is directed by Younus Salie. The producer is Nazrene Salie.

Moving on to the pay-TV service TopTV, note that a 2003 documentary, Tom Dowd AND The Language of Music, premieres on Silver (channel 112) at 8pm on Saturday.

Directed by Mark Moormann, it is about Tom Dowd, an innovative producer who engineered timeless records for many artists.

Dowd also formed strong professional and personal relationships with many of these artists.

Also worth noting is that the controversial local commentary show using puppets, ZA NEWS, starts on TopTV’s Top One (channel 150) at 9pm on Sunday, and is scheduled for repeats at 8.30pm and 11.30pm on Tuesdays.

“ZA News keeps an ear to the ground, bringing our audience a mix of the latest and most controversial current events in a witty and unorthodox way,” says a TopTV spokesman.

“The show parodies the formulaic style of media broadcasting to remind people that it is possible to engage humorously with societal issues that can often be a source of tension and frustration.

“With puppets designed by renowned satirical cartoonist Zapiro, ZA News offers a scathing yet side-splitting take on the local milieu of South African life. No one is safe, but everyone is welcome.”

Finally, on the movie front, note that SABC1 is to screen the 1985 drama, AMERICAN FLYERS, at 10pm today.

Starring Kevin Costner, David Marshall Grant and Rae Dawn Chong, the movie revolves around a sports physician, Marcus, who persuades his unstable brother, David, to train with him for a bicycle race across theRocky Mountains.

He doesn’t tell him that he has a cerebral tumour, and while David powerfully heads for the victory, Marcus has to realise that the contest is becoming beyond his capabilities. – The Mecury