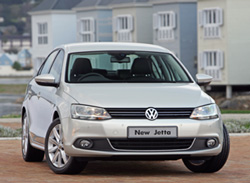 In spite of its popularity the Volkswagen Jetta has for years been subjected to derogatory remarks such as “boring”, “grandpa’s wagon”, ” the VW rent-a-car” and “golf with a glued-on boot” – but all of that is going to disappear rapidly now that the all-new sixth generation Jetta has arrived in dealer showrooms in South Africa.

No longer pasted together from bits and pieces salvaged from the Golf parts spare bin, the new-age Jetta is built on an entirely new platform and designer- panels not shared with any other Volkswagen. It now has the same new elegant appearance of the bigger, more expensive Passat stable mate launched here a few months ago and it has also been stretched to create a more passenger-friendly cabin with lots more leg- and head room.

All the variants in the new range now offer comfortable lounge seating for five adults plus 510 litres of boot space which can be enlarged even further, thanks to the 60:40 back seat split.

The new Jetta has a much classier presence than any other Jetta to date. From its high gloss black radiator and snazzy slit-eyed headlights (with daytime running lights) to its sharply sculpted bonnet, rakish angled windscreen and shapely derriere it’s now the sort of car that even The Boss would look at twice when he steps out of his V8 Jaguar XJ in the company parking lot.

The Jetta was first introduced in South Africa way back in 1980 and has since sold more than 260 000 units over here but I reckon the latest Jetta is going to ignite the sales afterburners quite dramatically. VW is already the top-selling passenger car brand in South Africa and if it continues to unwrap more models of this ilk the German carmaker is going to be very difficult to keep up with.

Even Japanese brand champion Toyota, which was recently squeezed into second position by the Germans, must now be wondering whether their new FJ Cruiser and reshaped stars such as Hilux and Fortuner have enough shine to regain South Africa’s hearts and wallets as well as the top-seller crown.

On top of that comes a choice of three specification levels: Trendline, Comfortline and Highline with standard equipment lists much too long to go into detail here so I suggest you hot-foot it down to your nearest VW dealer and pick up a brochure. Remember, if you want to add more bling you can always splash out on optional extras such as full leather upholstery, park distance control, Bluetooth, Satnav, top-of-the-range sound system, tow bar (not on the entry-level baby) Xenon headlights, a 230-volt socket on the centre console and dual zone aircon.

At the local Media launch I drove three variants: a Jetta 1.6 TDI Comfortline, the pricier 2.0-litre Jetta TDI Highline and the zippy Jetta 1.4 TSI Highline (118kW). All three models came with the full range of standard specs but all three were also further jazzed up with expensive optional extras.

All three test cars were fitted with manual gearboxes but a seven-speed DSG transmission is an optional extra on the 1.6 TDI which makes it a good cruiser because its seventh gear has been raised to act as an overdrive. This will no doubt make progress smoother and more economical, to say nothing about the extra benefit of not having to manually swap cogs in stop-start traffic.

The optionals were charming but honestly, all three were impressive enough without the extra bells and whistles. The latest Jetta handles like a dream. In fact, all three cars boxed well above their weight in terms of handling, dynamics, zip, looks and comfort.

However, for me the real mind-blower is the 1.4-litre TSI, for although it has all the class of a swish German Riesling from the Mosel wine region, the overalls who screw and glue the new Jetta together in VW’s Mexico plant seemed to have added a good few shots of tequila to the mix because this beauty certainly hops.

Wellie look at this!

Feed it wellie and it will squirt the zero to 100km/h dash in 8.3 seconds which is the stuff of cool street cred. The more than ample zip is also useful for those mornings when Daddy has to drop the bambinos at school and is running a few minutes late for his first meeting of the day.

All the new Jettas have electro-mechanical steering and although this kind of steering set-up tends to feel as though it’s wrapped in thick layers of cotton wool, the VW version has a bit more feel and the driver can actually feel it tightening up and become more direct when the coals are being stoked..

We drove through the tail-end of a vicious coastal storm and we could feel the steering compensating for the crosswinds and adjusting to the steep cambers of the old and narrow mountain pass we crossed.

The German engineers also did some classy work on the running gear and the cars cling well to the tarmac, even though they are slightly longer than previous models.

The electronic stabilisation programme (ESP) does a good job and in the 1.4 TSI we could feel it kicking in a few times around corners where water, sand and gravel made surfaces a tad slippery. In essence the ESP senses when the rubber starts losing grip and it then applies the brakes to one, two, three or even all four wheels while also adjusting engine power to correct a skid.

ESP, or traction control, can, on some cars, become a little intrusive when it tends to take over from the driver and the Jetta’s system also moves into action quite early, but hey, rather that than run out of road and experience and ending up in a ditch!

Again, like the two diesels, it is more than just enthusiasm that makes this car so appealing. The spirited 1.4 engine matched to the well-spaced six-speed manual box is truly a marriage made in automotive heaven. Who needs anything with a bigger engine than this?

We were only two okes on board the 1.4 during the launch drive on the undulating back roads between Knysna and Port Elizabeth but I reckon this car will happily gallop along with four or five aboard, plus some luggage – even on the performance wringing Highveld.

It costs more than the 1.6 diesel but for the extra lolly you get a really classy car that goes as well as it looks.

Not quite on the smell of an oil rag, but not bad

Our test drive model had fitted extras of about R30 000 of which I would certainly go for the metallic paint (R850), the extra front and rear airbags (R4240) and the leather seats (R12 080), even though the latter is on the steep side.

Considering its hatch-dicing nature the 1.4 TSI it is certainly not heavy on the forecourt juice, gulping only about 6.3-litres/km.

However, what really makes this model so likeable is the fact that it is a gentle, easy to drive and park car which will suit small families, cool young professionals and more mature drivers, yet it is also quick to grow horns to please those of us who enjoy digging in our heels and showing the whip occasionally.

The new Jetta has taken a big step into the future because it is a lot more now than just a common sense, rational purchase. It has found the classy and fun sides of motoring and although it still owns a few expensive suits VW has now added designer jeans, pointy Italian shoes and a few Tommy Hilfiger shirts to its wardrobe so that it can hang out with the trendy crowd where it should fit in quite easily…

The new Jetta models and prices are:

All new Jettas come with a price-inclusive five-year/90 000 km maintenance plan and a three-year/120 000 km warranty.