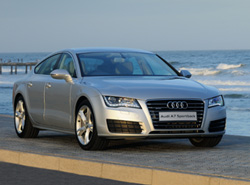 The three Teutonic Tarzans of the luxury sedan world are slugging it out again, this time in the new sloping back category where BMW’s candidate is its 5 Series GT, the Mercedes-Benz hopes are pinned on its three CL models and Audi steps into the ring with its A7 Sportback.

There is also another German carmaker looking in from the Porsche family in the shape of its two entry-level Panamera PDK models and interestingly enough, Audi also has a competitor in its own Vorsprung Durch Technik ranks in the shape of the slightly smaller, and not quite as zooty, five-model A5 Sportback range.

None of these cars are easy on the credit card, yet in spite of the heavy price tags these beauts wear, this segment is growing steadily, considering that it is a fairly niche market. Not that it is all that surprising because the cars are really quite special: they are quite different (and handsome) in looks, luxurious, fast, agile, great fun to drive, carry four passengers in comfort and they all wear brag badges of note.

No lack of grunt

I love giving cars personality tags, so the BMW gets a gold star for its dynamic handling, the Merc scores with its classy pavement presence, Panamera, as to be expected, combines handling and performance as only Porsche can, and the Audi Sportback is the most beautiful of them all.

I recently spent a week of great fun driving the Audi A7 Sportback around some of the Cape Peninsula’s magnificent mountain passes, quiet country roads and meandering coastal routes. The cherry on top was that I was at the wheel of the 3.0-litre TDI Quattro S tronic which I prefer to its stable companion, the 3.0-litre FSI model.

The TDI is the less expensive of the two variants at R717 000 and although it is also slightly slower out of the starting stalls with a 0-100km/h time of 6.85 seconds, it certainly doesn’t lack grunt with its 2.967-litre V6 pushing out 180kW and 500Nm – enough to reach an electrically curtailed top speed of 250km/h.

Not that anybody who drives a car in this bracket is really too concerned about fuel consumption, but it is nice to know that Audi claims this diesel will only swallow 7.2 litres per 100 km.

I can understand why anybody would want to own an A7 because it is something quite special. Everything about this car makes my heart beat a little faster; it looks fast in a nicely flamboyant manner between snazzy and show-off; it crouches mean and low on the tar and although it looks good from any angle, the front end has the kind of stunning good looks any life-saver would swap his six-pack for.

Oozing class from every door

The cabin is wall to wall with handsome but practical features and it simply oozes Platinum Class with leather, matt aluminium, and wood finish, placing the A7 firmly in the posh bracket.

Standard on the kit list are goodies such as dual zone climate control, advanced park distance control with back view camera, fully adjustable steering column, windows and mirrors and a multi-function MMI sound system, including connections for iPods and MP3 players.

All of which brings us naturally to the obvious question – what’s it like on the road? Exceptional would be a good word to describe it. In spite of its size (it rides on the same underpinnings as the A6 luxury sedan) this plush four-seater hugs the road as though it is in love with it, displaying a near perfect balance between comfort and dynamics. To disturb the A7’s equilibrium you would have to do something pretty damn silly at excessive speed because it doesn’t rattle easily, even when you pour on the coals.

Besides, the Sportback is the first Audi to come armed with active counter-steering assistance which makes stabilising the vehicle even quicker and more effective.

Of course much of the car’s impressive roadholding is thanks to Audi’s latest generation Quattro all-wheel drive, complete with crown gear differential and torque vectoring, which adds to the car’s super glue nature.

Audi has clearly also spent extra quality time on sharpening its steering and the Sportback runs true and straight at where you point it with the minimum of fuss. The feedback is excellent and flicking the A7 through the corners feels good. I particularly liked the car’s small, thick steering wheel.

The seven-speed automatic gearbox is soapy smooth and quick, whether you use the flappies on the steering wheel or leave it to do its own thing.

And that chunk of sophisticated metal under the bonnet is a thundering beast that churns out growling, seamless power with so much ease it is enough to make you want to clap your hands and holler with pleasure. Yet, in spite of the fact that it has bulging muscle power, you can slip off your racing booties and idle the Sportback down to the shop to buy the Sunday paper wearing a gown and slippers. What also makes the A7 so likeable is that it also has a pleasantly gentle side to it so it is as happy to purr down to school with mummy at the wheel as it is to grow horns when daddy is in the mood for a tad more frivolity.

Classy… but you can even more class

As a standard package the standard A7 is already seriously refined but buyers also have further ways of adding personality to their vehicles with one of three option packs: Sophisticated (R43 400), Sport (R50 500) or Progressive (R51 500) and there are also several other individual bits of finery and luxury which can be used to add even more class to this smart German chariot.

Exciting news is also being whispered in the corridors of Audi South Africa about an S-badged A7 and maybe at some stage, hopefully not too far away, maybe even an RS7 heading this way.

Meanwhile, the standard A7 will do very nicely, thank you… in silver, if you please.