Vodacom 4U and BlackBerry are powering 4U Rage Festival for its 10th annual appearance as the organisers swap gears for a lower cog in their preparations. 4U Rage Festival is nowSouth Africa’s largest and most exhilarating youth event and will be taking place in Umhlanga, Ballito,DurbanandPlettenbergBay. As summer break 2011 kicks in,South Africa’s loudest brand G&G Productions will be hosting the craziest 2½ week -long party of pure outrageous action, all happening from the 25th November until the 10th December! 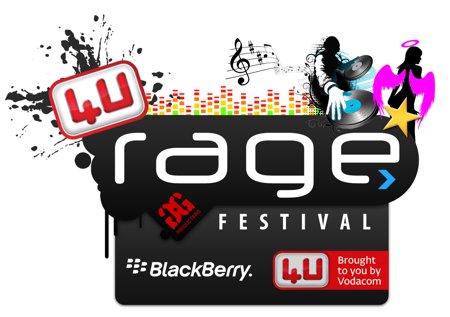 Greg Walsh, Managing Director of G&G Productions says that “Rage is about reaching out to our fans, listening to what they want and then delivering back the largest, loudest and most engaging event experience of their lives.”

It all began back in 2001 with only 8000 Ragers and exploded to a roaring 65 000 attending in 2010. “This year we are going large and are expecting numbers to reach well over 80 000! This is undoubtedlySouth Africa’s largest youth festival”, said Walsh.   The sun-bleached beaches will be packed with exhilarated Ragers as they celebrate their end of year exams and the beginning of freedom.

Through all of the excitement safety is paramount.  “G&G Productions is dedicated on all fronts, working with the council, fire, police as well as the various municipal health and safety, and risk management departments to ensure the safety of all attendees during the Festival. Although the Plettenberg Bay leg of 4U Rage Festival is run by area specialists RK Events, the same philosophy and dedication to seamless, safe celebrations is adopted”, says Financial Director and Safety Officer of G&G Productions, Bruce Hurley.

The safety of our Rage-goers is extremely important and as such drinking and driving is strictly prohibited at 4U Rage Festival nationwide. G&G Productions has provided a safe and efficient, well-branded shuttle system to ensure that Ragers can get to all the hottest parties and ultimately, safely back home. Each trip costs approximately R10 – R30.

Stimorol are also up to something huge in this, their third year of thumping 4U Rage Festival partnership.  Ragers can look forward to 2 of the quirkiest nights at Rage this year as Stimorol take their brand Infinity to a whole new level of huh?!?
The 4U BlackBerry Rage squads will be roaming the Rage streets giving away incredible prizes during the 2½ week party sensation, from 200 BlackBerry handsets and 20 BlackBerry PlayBooks to flips in aerobatic planes, bungee swings off the Moses Mabhida Stadium and fully-catered yacht parties for 20 people at a time.

And the fun continues. The Amazing Race powered by Vodacom 4U and mapped by BlackBerry will take place in Umhlanga on the 2nd December, Ballito 3rd December and Plett 8th December and will be open to all Rage-goers for entry. 40 teams per region will go head to head to win one of Rage 2011′s hottest take-homes, a BlackBerry Playbook.  Entries at www.ragefestival.co.za.

The Fresh Driveon 5FM will be hosting daily competitions:  giving away VIP Platinum 4U Rage Festival Passports and BlackBerry 9300 3G Smartphones from the 3rd of October as the buildup to the ultimate Rage prize begins! On the 7th October, 3 lucky Ragers will each win 8 nights in the most coveted Rage prize to date, the 4U Rage Mansions for them and their 7 closest pals.  The prizes include Platinum Passports for all guests, a personal chef and a driver. These winners are set to have the hottest week of their lives! There is a mansion up for grabs in each of Umhlanga, Ballito and Plett and each prize is valued at over R100 000. More details are available at www.ragefestival.co.za and www.5fm.co.za.

4U Rage Passports are now selling fast as Rage Agents assigned at over 270 schools nationally spread the word and get the year-end celebrations into full swing. Rage Passports are a prepaid, easy access pass into all venues and hot spots under the 4U Rage Festival banner. There are four types of 4U Rage Festival Passports available: VIP Platinum Passport, Ballito Passport, Umhlanga Passport and Plett Rage Passport. With all Passports Ragers can look forward to discounts at many fast food outlets, restaurants, bottles stores, clothing stores and activities in each region.  Depending on the Passport purchased, holders gain access to up to 42 events in the region.  The super exclusive Passports are available from R600 to R1300 at schools and Vodacom 4U stores nationwide.  More info at www.ragefestival.co.za.