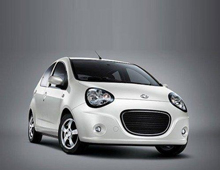 Driving the little Chinese entry-level Geely GL for the first time is like expecting a dish of predictable sweet and sour pork and being served a delicious meat and prawn chow mein instead.

There I was expecting a strange-looking boxy set of wheels with a hippety-hop ride, mik-and-druk steering, a little coffee grinder engine and loopy cabin finish but instead, the Geely surprised with a very pleasant ride, cosy, well decorated two-tone interior and a sprightly engine.

Resemblance to a Panda

The LC, called the Panda in China because of its remarkable resemblance to that country’s iconic black and white bear, is actually a pleasant all-round surprise. Not only is it actually quite cute-looking but it brims with safety and fancy features which are quite remarkable for a sub-R90 000 entry-level pikkie.

There are three five-door models to choose from; a GS at R79 999, a GL at R84 999 and a GT at R89 999 and even the basic model comes standard with safety features such as ABS and EBD, power steering, front and rear seat belts, third brake light, rear door child locks and collapsible steering column. A pity the entry-level Geely doesn’t have air-bags whereas the mid-range model has front airbags and the GT is fitted with a full-house six airbags.

All three baby hatches are powered by the same 63 kW/110Nm 1.3-litre engine linked to a five-speed manual transmission driving the front wheels.

Impressive on the road

On the road our little test wagon behaved impressively. It galloped quite gamely along and sits quite confidently on the road although things do get a tad bouncy when the road surface becomes uneven. The gearbox is a slightly sticky and takes time to get used to, particularly trying to find the reverse gear slot.

Fuel and emission figures were not available for our test vehicle but both should be fairly low, considering the size of the engine.

In the company of competitors such as Chery QC, Chevrolet Spark Lite, Tate Indica and the Chana Benni, the entry-level Geely ranks the 4th least expensive and with its impressive features, solid perceived build quality, teddy bear looks and sprightly ride it is a serious contender in the first time new car market.

After a few hiccups when launched in South Africa, new owners Hallmark Group and Magic Group took over the franchise about 18 months ago and they have blown new life into the brand. Already there are 45 Geely dealers scattered around the country and there will be three new models destined for South Africa.