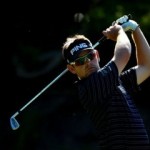 Louis Oosthuizen was unable to add another St Andrews success to his 2010 Open triumph at the home of golf in the Alfred Dunhill Links Championship that ended on Sunday.

The South African – who finished 17-under-par and tied in fifth place – still believes his game has turned a corner after struggling for form at times this season, and was happy with his week’s work at the scene of his former glory.

“I’m hitting the ball really well. I struggled on the greens and couldn’t get the speed right,” said Oosthuizen, who was playing with his brother in the tournament.

“I left everything short which was disappointing, but it’s good to see my game going in the right direction.

“It’s been really nice walking on the fairways at St Andrews again and brought back nice memories.

“Playing with my brother for three days was really nice.”

The competition was won by Northern Irishman Michael Hoey, who shot 68 for a 22-under-par total and two shot victory.

US Open champion Rory McIlroy eventually finished runner-up after his faultless seven-under-par 65, while 2010 US Open champion Graeme McDowell’s 69 gave him a share of third place – one shot further back.

Putting woes were the story of the tournament for Oosthuizen’s countrymen, Charl Schwartzel and Jaco van Zyl.

Schwartzel, who won the US Masters earlier this year, finished 15-under par and tied for ninth place.

“I’ve got a couple of days off now and then I go to Bermuda for the Grand Slam, then China and Japan, the Presidents Cup, the World Cup and the Race to Dubai so the season is far from over.”

Another South African, Ernie Els was Major winner. He has played regularly in the tournament with father, Neels, and finished on seven-under-par.

With the tournament featuring a number of well-known personalities, Els said he was proud to have played alongside legendary Dutch soccer player, Ruud Gullit.

“This is always a stunning competition, today I played with one of my heroes, Ruud Gullit, which was brilliant,” said Els.

“I’ve played with my father many times and we always have a fantastic week, it’s a shame we didn’t do better.

“Dad needs a couple more shots and I need to play better, but regardless of the result, the format of this tournament always makes it fun.

The prestigious Championship is played over three of the world’s best known and respected links courses – the Old Course at St Andrews, the Championship Course at Carnoustie and the Kingsbarns Golf Links.

The competition format incorporates two separate competitions – an individual professional tournament for the world’s leading golfers and a team event in which they are paired with some of the most celebrated amateurs.