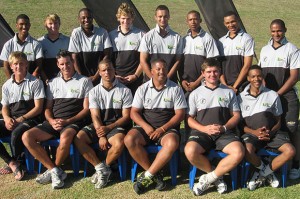 The SWD U/19 team had a disappointing start to the 2011/12 season when they lost by 10 wickets against Western Province in Cape Townover the weekend. Coach, Vernon Seconds, and the team will especially be disappointed with the poor batting performance from the men from the Southern Cape.

Winning the toss, and elected to bat first, SWD was dismissed for only 96 runs in their first inning. Gurshwin Sparks (38; 59 balls, 5×4) was the only SWD batsman that made a useful contribution with the bat.  WesternProvince, also struggled in their first innings and was bowled out for 138 – a lead of 42 runs. The captain, Kobus Scholtz, impressed with his off-break bowling and picked up 5/28 with the ball. SWD, again failed in their second innings and only managed to put together 87 runs. Sparks (22; 74 balls, 3×4), was again the only batsman that managed to overcome the WP bowling attack.WesternProvince, who was set the target to score 46 for victory did so with all ten second innings wickets in hand.

SWD’s next encounter in the CSA Provincial u/19 challenge will be this weekend when they play Border as from Friday at the Bridgton Sport Grounds in Oudtshoorn.