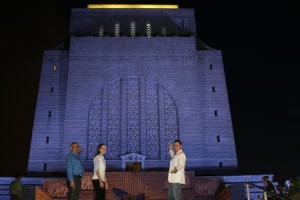 Pieter Cloete, marketing manager of Go Life Health Products, together with Jeanne-Marie Louw, dietician and passionate ambassador for diabetes and volunteer for DSA, has decided to take it upon themselves to actively promote diabetes awareness in South Africa during the month of November, which is international Diabetes Awareness Month. During this month, 14 November will also be highlighted as World Diabetes Day.

Ahead of World Diabetes Day, the International Diabetes Federation (IDF) is calling for ACTION.  Act on diabetes. NOW!

Celebrated every year, World Diabetes Day is a campaign led by the IDF and its more than 200 member associations in over 160 countries and territories. Created by IDF and the World Health Organization in 1991, World Diabetes Day became an official United Nations Day in 2007 thanks to a UN resolution that calls on all member states to organise events to mark the day.

World Diabetes day 2011 forms part of the five-year campaign that addresses the growing need for diabetes education and prevention programmes to tackle diabetes and its life-threatening complications.  The World Diabetes Day (WDD) campaign aims to establish access to diabetes education as a right for all people with diabetes, to promote greater awareness of the risk factors and warning signs of diabetes, and encourage best-practice sharing in diabetes prevention.

The IDF called on all countries to mark World Diabetes Day and increase diabetes awareness by lighting monuments around the world in blue – the colour of the blue circle, the global symbol for diabetes.

In 2010, over 900 monuments and buildings in 84 countries were lit in blue on 14 November in order to raise awareness of diabetes and World Diabetes Day. As a result of the continued popularity of this initiative, it continues to be a core component of the WDD campaign.

Jeanne-Marie Louw, with the assistance of Pieter Cloete from GoLife, will spearhead the South African initiative  towards diabetes awareness by adhering to the call from the IDF and lighting the well-known Voortrekker Monument in Pretoria in blue, for the third consecutive year. Their joint efforts arranged for sponsorship from Osram, who will again provide the lights needed to turn the Voortrekker Monument into a “blue beacon for diabetes awareness”.

Act on Diabetes! NOW! Get tested… Know your number.

For more information on Diabetes visit www.diabetessa.co.za or about the campaign www.diabetesblue.co.za

The Voortrekker Monument in Pretoria will be lit in blue for the month of November.  A small launch function will be held on Thursday 3 November for the media, 19h00 for 19h30.