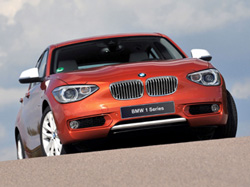 The BMW 1 Series has shed its drab, rather cheap-looking interior and boring boxy body to mature into a really sexy premium compact hatch with a snazzy, youthful cabin and a cute and cocky stance.

Just like a Jack Russell is a big dog in a small body the completely revamped baby Beemer is a big car in a small body – and not only does it look good it also feels confident and all grown-up on the road and with a long list of add-ons, extra safety measures and a big improvement in fuel consumption and emission levels, it now comfortably takes over as pack leader of its class.

It certainly now has more than enough bells and whistles to show its cheeky derriere to the likes of VW Golf, Honda Civic, Mazda3, Ford Focus, Alfa Romeo, and the Audi A3.

Having just undergone its mid-life make-over after selling more than 25 000 in the four years since it arrived in South Africa, the jazzed up version with all its additional attractions will appeal to an even wider audience, many of them away from the brands they are currently driving or considering. Interestingly, a recent survey in showed that 73% of current 1-Series drivers previously owned different brands.

Key attractions of the range is the four model variants (five-door, three-door, coupe and convertible) plus two specifications and a long list of optional add-ons which allows owners to individualise their cars all the way from sporty fun and conservative smart to outrageous bling.

The rejuvenation of the 1 Series is so comprehensive that it can rightly be described as a new model. As such it is also the first Beemer to feature two new Urban and Sport Lines which offer a wide choice of equipment options including 11 exterior colours, interior trim and accent strips, fancy gadgetry and light-alloy wheels (even a set in gleaming white!).

In essence the entire range has been sportily spruced up with new seat trim, bulging wheel arches, slinkier headlight clusters, a more menacing kidney grille and a coupe-like sloping roof while the interior – and dashboard in particular – now longer looking as though it comes from a general German parts bin where Audi, VW and Merc also do much of their gauges and dials shopping.

The cabins are also more spacious and the much criticised cramped rear leg and head space has been improved and the luggage department has also been stretched.

BMW is also particularly proud of the range’s low emissions and fuel efficiency and the fact that 58 of its models now have an emissions rate of less than 160g.

Like its predecessor, the new BMW 1 Series comes standard with BMW EfficientDynamics technology that includes an Automatic Start/Stop function, available with both the manual and automatic transmissions (including the all-new optional eight-speed automatic), and ECO PRO mode which can be activated via a ‘driving experience’ switch.

Safety features include crumple zones to absorb the force of an impact and deflect it away from the passenger cell, front airbags, side airbags built into the seatbacks, front and rear head airbags, three-point automatic belts in all seats, front seatbelt tension limiters and pre-tensioners, and ISOFIX child seat mountings in the rear.

Smart technology provides for seamless integration with the Apple iPhone and other smartphones with an Apps option that allows iPhone users to do things like listen to web radio stations through the car’s audio system and use Facebook and Twitter services.

Comfort features and driver aids include multi-function air conditioning, keyless ignition and a special switch which can be clicked to suit the driver’s personal preferences with mode choices, Comfort, Sport and Eco Pro. On cars fitted with the optional eight-speed sports automatic transmission, Variable Sport Steering or Adaptive Suspension, there is also a fourth mode, SPORT+.

In addition, standard across the range are remote-controlled central locking, height-adjustable front seats, electric exterior mirrors, electric front and rear windows, BMW Business radio/CD player with six speakers and an AUX IN connection, and air conditioning. The engine is switched on by touching the Start/Stop button whenever the radio key is inside the car.

But if looks and fancies are not enough already to impress the daylights out of any prospective buyer, where the new baby really shows its class is out on the tar, particularly on a sweeping stretch of road devoid of traffic, potholes and the blue light brigade.

At the Media launch in Gauteng I got to drive the first two models to hit the dealer showrooms, the 116 and the 118 5-door versions along enough corners, winding roads and straight tarmac to takkie-tickle the pleasure pedal.

My first spell was at the wheel of the 125kW/250Nm 118 which BMW says will sprint comfortably to 100km/h in 7.4 seconds and on to a top speed of 225km/h. It certainly felt lively enough to achieve those kinds of figures even though our drive was in the power-sapping thin air of Jozi Badlands.

With its quick engine response our car felt keen to trot and like all Beemers you can’t scare it easily in the twisties either. The ride is comfortable and quiet when cruising leisurely and if you put foot the big four-cylinder has a pleasantly grumpy growl.

The 1-Series is still the only rear-wheel-drive car in its class and it offers a ride not matched by any of its competitors with the almost perfect 50:50 weight distribution certainly adding to its confident cling in the corners.

The ride also felt more comfortable and less bouncy-taut that its predecessor.

Roadholding is already good but can be further sharpened by opting for Adaptive Suspension, which has electronic damper regulation, and by paying for 17 or 18-inch light-alloy wheels as an alternative to the standard 16-inchers.

All of this adds up to an exceptional dynamic and highly enjoyable drive, smooth and pleasant enough for mother-in-law’s Sunday drive and exciting enough to keep any man-child grinning from ear to ear.

What’s more if you drive it like a good citizen it will give you a combined-cycle fuel consumption of 5.8 to 5.9 litres per 100 kilometres and CO2 emissions of only 134 to 137 grams per kilometre (EU test figures, variations due to differences in the tyres fitted).

Then I slid in behind the wheel of the 116 which is armed with slightly less under-the-bonnet punch – and liked it even more. It felt even keener to trot even though it has 25kW and 30Nm less than the 118, which both my co-driver and I found difficult to fathom.

The car just felt lighter, a bit sharper, and cockier in the corners. Maybe the 118 was a Friday car and the 116 was tuned, screwed and glued together on the day the staff bonuses were announced.

Of the two models my choice would be this less expensive 116, but both cars are fine examples of BMW at its best – handsome cars, well put together, good lookers and a lot of fun to drive.

Other 1-Series models, including a 2.0-litre diesel should be at the dealers in the near future.

The 1 Series model ranges and prices are: