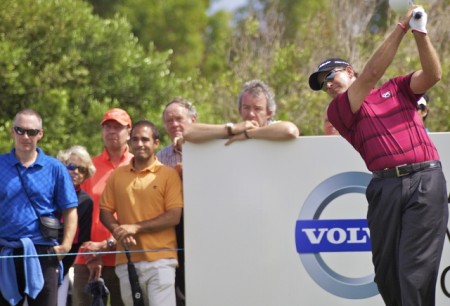 The European Tour’s first-ever true ‘tournament of champions’ event has been confirmed for South Africa’s number-one golf course, The Links at Fancourt, from 19th – 22nd January, with the prospect of the finest field ever assembled for a European Tour event on African soil chasing the €350,000  (Approx US$500,000) first prize. With a prize fund of €2million (Approx.US$2,700,000) the Volvo Golf Champions is the first solely-sanctioned European Tour event of 2012 and offers the circuit’s most valuable purse on the African continent.

The Volvo Golf Champions is open only to European Tour players who have won an event on the previous year’s European Tour International Schedule and current Tour Members with ten or more European Tour wins to their name. With prize money and valuable Official World Ranking Points on offer from first to last place and with only a dozen events until the Tournament, an unprecedented gathering of global golfing talent is expected to line up at the world-acclaimed Links at Fancourt, recently voted number one course in the country and designed by South African golf legend Gary Player.

Commenting on the selection of The Links at Fancourt, Per Ericsson, President, Volvo Event Management said, “Quality, both of the challenge the golf course will pose to the field of proven champions and of the infrastructure, was a key consideration and The Links at Fancourt is right up there with the very best in the world.”

“We also wanted a location that was suitable for the staging of the world final of the Volvo World Golf Challenge which will be staged simultaneously, with the successful formula of ‘Playing with the Pros’. Volvo’s customers and prospects can enjoy the sporting experience of a lifetime by playing alongside the stars of the European Tour for one day, live on worldwide TV,” continued Ericsson.

He added, “South Africa is an increasingly important market for Volvo and we believe everyone will enjoy all that South Africa and its world-renowned Garden Route will provide in January.”

The inaugural Volvo Golf Champions, which was staged as a celebration of global golf in January, saw the 34-year-old Arizona-based Englishman Paul Casey triumph, securing his place in the Fancourt field. Having won on every continent in the world except Africa, Casey is determined to put that right as he defends his Volvo Golf Champions crown in South Africa early next year.

“I think that the news that the Volvo Golf Champions is heading to South Africa will be very well received by the players as we have heard nothing but amazing feedback on the Links course. I haven’t played a tournament in South Africa for a while so I am really looking forward to starting my year there. With only winners qualifying this year, it is going to be a smaller, more elite field which will make it feel even more prestigious.”

Casey continued, “Winning the inaugural Volvo Golf Champions in January meant so much to me as it was my first title since coming back from a rib injury. At the moment, I am trying to recover from a niggling toe injury and while I have a few big events coming up where I will be aiming to win again, I am also looking forward to starting 2012 afresh and hoping to enjoy an injury-free year. Defending my title at the Volvo Golf Champions will be at the top of my New Year’s Resolution List!”

The Links at Fancourt, consistently in the Top 100 Golf Courses in the World since it was opened in 2000, is an awe-inspiring example of magnificent design and golf-course construction, considered by many to be the best example of links golf outside of the UK and Ireland.

Grand Slam champion Gary Player says, “I feel a genuine affinity for Fancourt having been involved from day one as a designer of the original golf courses, adding, “Volvo selected my design at Jinji Lake International Golf Club for the 2010 Volvo China Open, and the quality they demand is great for the game of golf, and we look forward to hosting the Volvo Golf Champions at The Links at Fancourt in January.”

Masters Champion Charl Schwartzel added, “This is a very prestigious tournament and it is a huge compliment that Volvo has chosen to move the Volvo Golf Champions to South Africa. Fancourt will provide a fantastic showcase for all the wonderful assets South Africa has to offer. I spend so much of my year travelling around the world that I relish the opportunity to play in front of my home fans. In fact, I have won four of my seven professional titles in South Africa so the fans obviously give me a great home advantage which hopefully will help me in January.”

Kerrin Titmas, Chief Executive Officer of Fancourt commented, “It is a great honour and privilege for Fancourt and The Links to have been selected by Volvo, IMG and the European Tour to host a tournament of champions event of such a prestigious nature.   This event will give the world a view of the breath-taking Garden Route within our beautiful country, whilst The Links will undoubtedly prove to be a challenging test to the most formidable field of tournament champions that South Africa has ever hosted.”

George O’Grady CBE, Chief Executive of The European Tour said:  “We are delighted to announce the Volvo Golf Champions will take place at Fancourt Golf Resort in 2012 as the first genuine season-opening tournament of champions, a format we are very pleased to incorporate on our International Schedule. We cannot put a value on just how important long-term sponsors such as Volvo have been to the growth of The European Tour, Volvo having partnered us for over 20 years. We thank the Sunshine Tour for the opportunity to host this excellent tournament at one of South Africa’s leading courses and we look forward to welcoming this elite field of champions to the magnificent Links at Fancourt in a country where golf, and its golfers, are currently enjoying such a rich vein of form.”

Guy Kinnings, Managing Director, IMG Golf, the promoter and event co-owner with Volvo concluded, “The 2012 Volvo Golf Champions will deliver an exclusive, international line-up of proven champions to South Africa, where their countrymen’s golfing achievements speak for themselves. It is not before time that the European Tour has a tournament of champions and given the current health of the European Tour we will clearly gather an enviable field to Fancourt in January.”