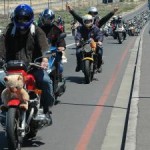 It’s difficult to judge just when a tradition becomes an institution but, when representatives of the homes, creches, charities and grass-roots child groups who benefit to the tune of more than 100 000 toys each year say bluntly: “Don’t stop!” and even the Air Force is keen to get involved, we can safely say that point has been passed.

That institution is, of course, the annual Toy Run, held on the last Sunday of November each year (this year it falls on the 27th), an event that has moved beyond the motorcycling community in the past three decades to become part ofSouth Africa’s vibrant rainbow culture.

In this, the 29th year of the event, more than 20 Toy Runs will be held all overSouth Africa, in big cities and small communities, from as few as 20 motorcycles to as many as 20 000, all with a common cause – toys for kids.

The Johannesburg Toy Run has become so big that the organisers have shifted the emphasis from the mass rides (there were five in 2010, converging on the same destination, and the logistics were a nightmare) to a new end venue at the Benoni Northerns Sports Club inBrodigan Avenue, Northmead.

Toy Runners are advised to avoid the N12 at all costs due to construction; take the R21 to the Atlas off-ramp, after the Airfreight turn off, and follow the banners.

The Toy Run will be open from 8 am to 3pm; the entry fee will be a toy, toiletry item, educational toy or stationary item to be donated to the less fortunate children in our communities.

There will be entertainment all day at the club with three live bands, plenty to eat and drink at biker-friendly prices, and Toy Run memorabilia, riding gear and jewellery on sale.

However, for those diehards who reckon it isn’t a Toy Run without a mass ride, there will be groups meeting at Edenvale/Meadowdale Checkers Hyper in theEast Randand WestGate Shopping Centre in the West, to ride together to the end venue.

Any licensed rider on any licensed motorcycle or scooter is welcome; the Toy Run is held on public roads with the co-operation of the Traffic department but they won’t co-operate with any unlicensed bikes or unroadworthy behaviour.

InCape Townthe Toy Run start venue for the northern suburbs will, for the first time, be Ysterplaat air force base offKoeberg RoadinBrooklyn, where the Run will be hosted by the Moth’s Motorcycle Club.

Southern suburbs Toy Runners will meet, as they have done each year since 1988, at the Ottery Hypermarket. The two processions – more than 7000 bikes in all – will join up atSettlers Wayand the end venue will be at Maynardville.

If you don’t have a bike, grab spot along the route – the bridges over the M5 are always a good choice, as isUnion Avenueoutside theCeceliaForest- and revel in the sights and sounds of a truly grand parade, which takes more than an hour to pass any given point.

You’ll see every type of motorcycle and scooter imaginable, all festooned with toys, from the Toy Run’s signature teddy to cricket bats, fire engines, Barbie dolls and even bicycles.

Then come along to Maynardville for the party of the year; entry is free, as long as you bring at least one toy – but they won’t let you in empty-handed.

There will be food, drink, Toy Run memorabilia, bikes, riding gear and jewellery on sale, live music from no less than four rock and blues bands – Joe Public, Spaceman, Tuxedo and the Bootleggers – and wet-yourself comedy from the man who has perfected the art of making Capetonians laugh at themselves, Kurt Schoonraad.

But literally overshadowing the whole event will be enormous trucks and trailers that, by the end of the day, will be filled with thousands of toys – every one of which will go to a child who would not otherwise receive a Christmas gift at all.

A long time ago a Toy Run rider called it a gesture from the city’s loudest minority to its most silent but it is much more than that now. A significant proportion of the toys come from people who don’t ride motorcycles and most of the monumental infrastructure necessary for a public event of this size is donated by businesses that have nothing to do with motorcycling, that have nothing to gain from getting involved but who do it for the children.