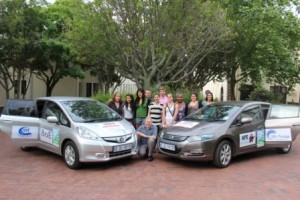 The Sustainable Seas Trust’s (SST)SEA Pledge Coastal RoadTour is rapidly gaining support for its messages of marine conservation, having completed almost half of its journey alongSouth Africa’s coastline. The campaign, which commenced inPort Elizabethon 12 October, 2011 will see the SST team visit over 20 coastal towns on its way from Sodwana to Saldanha, collecting pledges from people, business and institutions who intend to increase their efforts at preserving our marine environments.

With the impending COP 17 climate change convention set to occur in Durban next month (28 November – 9 December 2011), the aim of the SST SEA Pledge Coastal road Tour is to illustrate to all South Africans the impact that we are having upon our oceans and the environment, as well as the importance of us living sustainable lives. SST aspires to collect pledges from all ofSouth Africain which people undertake to set and achieve goals that will reduce their negative environmental footprints and increase their positive environmental handprints.

SEA Pledges can take many forms, and these include: written, spoken, photographic, video or monetary commitments to behaviour that will positively affect the environment and measurably improve the manner in which people treat the environment. Pledges can also be financial, and all funds go to charitable causes.

At each venue on theSEA Pledge Coastal RoadTour Dr. AJ Ribbink, Director of the Sustainable Seas Trust and primary champion of the South East African Climate Consortium (SEACC), will speak about the fundamentally important issues inSouthern Africa, particularly those encountered by impoverished coastal communities, in the face of climate change. Other issues which are addressed at each SEA Pledge include increasing the awareness about the need for education and skills training in coastal communities that depend primarily on subsistence fishing, illustrating that the limits of what we put into and take out of the ocean are being exceeded, as well as the importance of the restoration of the coastal resources and ecosystem goods and services upon which people depend.

After thePlettenbergBaystopover on 3 November, theSSTSEAPledge team will be visiting the following towns and cities: Knysna (4 November), Hermanus (6 November),Cape Town(7-9 November), Saldanha (10 November),MosselBay(14 November). In every town, the team endeavours to have the Mayor officially put the location on the SEA Pledge Map to show the community support and involvement in this important crusade.

According to Dr. Ribbink, “anyone anywhere can make a SEA Pledge, although those most closely associated with the sea, coasts and estuaries should take the lead, and others will follow. There are millions of specialist users of the seas throughout the world who use the seas for recreational, commercial and industrial purposes. All have a vested interest and are the obvious first choices for pledges as improving the seas is of direct interest and value to them. From school groups to diving concessions, anglers to surfers, the more people who make SEA Pledges the better!”

On Saturday, 3rd of December 2011, in the middle of COP 17, SST is planning to have thousands of people exchange pledges at locations across the country. To get involved, visit www.sst.org.za for more information. Additionally, stay up to date with the progress of the SST SEA Pledge Coastal road Tour team and support the cause by following ‘@SEApledge’ on Twitter and liking the ‘Sustainable Seas Trust and SEA Pledge’ page on Facebook (facebook.com/seapledge).

“With every drop of water you drink, every breath you take, you’re connected to the sea. No matter where on Earth you live”. Sylvia Earle, SST Trustee.