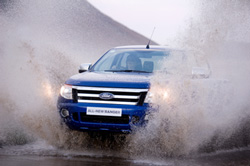 Makers of spirited cars constantly strive to find the optimum balance between comfortable drive and dynamic handling while bakkie-makers these days face the challenge of building capable workhorses that are also comfortable and safe – something which Ford has achieved with remarkable success with its newly launched Ranger bakkies.

The more car-like cabin and ride tendencies in bakkies are already clearly noticeable in the new Isuzu, Mazda BT-50, Mitsubishi Triton, Nissan Navara and Toyota Hilux with the VW Amarok even further down the road. Now the Ford ranger line-up has joined the fray and it is every bit as good – and even better – than some major players.

In brief, the Ranger is extremely competitive in all the key evaluation departments that count towards achieving a good balance between ride comfort, clamber and carry, price and very importantly, it is also the first local pick-up which can brag with a 5 Star EuroNCAP safety rating.

What’s more, not only is it a good-looking chunk of metal, it also beats the best of opposition by about 100mm with its new of water wading depth of 800mm and Ford says the new Ranger’s frame is twice as strong as its predecessor which helps to increase its towing capacity to 3350kg.

Factor in fancy aids such as Hill Descend Control and Launch Assist, reverse camera sensing, ABS brakes, seven airbags and cleaner engines which will give up to 1000km or more on one 80-litre tank of fuel and you have a range of bakkies very far removed from the uncomfortable agricultural implements these vehicles were up until just a few years ago.

Ford are very proud parents of the new Ranger and claim they achieved everything they set out to do with this new bakkie which was, inter alia , to create a pick-up (to use the favoured American term) that is green, safe, handsome, comfortable, frugal, highly capable of bundu bashing, hauling big loads and good value for money.

After spending a good number of hours at the wheel of different Ranger models on the sweeping and undulating tar roads in the Hazy View, White River and Nelspruit area and wading through running water, clambering up rocky trails and snail-pacing down muddy slopes on a fairly severe off-road course I came away seriously impressed by how much the new Ranger has improved over its predecessor.

Particularly the ride quality is streets ahead of the previous model and overall it is a much nicer car, oops, bakkie, both at a fair lick on the smooth black stuff or when torque-wrestling with tough off-road conditions.

One of the most noticeable improvements is in the steering department where the previous model came in for quite a bit of criticism for being rather vague and much too loose. The new Ranger feels better weighted and the suspension is much less hippety-hop, especially at a fair lick on the tar.

Transmissions vary from five- and six-speed manuals and a six-speed automatic with both two and four-wheel drive trains.

The toughie four-wheel drive vehicles come with shift-on-the-move via a dial on the centre console and it also has as low-range transfer case, hill descent and hill-start assist (great for those really steep ups and downs, particularly in the high, steep dunes of places such as the Namib Desert), plus cruise control on the fancy models.

To show how serious Ford is about shouldering its way to the forefront of this huge market segment even the entry-level model feels like a car inside and as the price increases so do the many fancies. Just two steps up the ladder and the models come standard with a radio and bigger wheels and from there upwards kit can include fog lights, even bigger wheels, leather seats, cruise control and up to seven airbags. However, even the base models can be made safer with a R5300 optional extra safety package which includes two airbags and an ABS/ EBD braking system.

For those whose passion for bling can stretch to R402 000, there is also a special edition Wildtrak with fat 18″ wheels, heated leather seats, rains sensing wipers and a very eye-catching paint job.

The models are too many and too varied to describe in any sort of detail but one thing is sure – this is one helluva classy range, particularly in the living quarters, so don’t be surprised to find a snazzy command centre from where the driver can control the aircon, sound system and Bluetooth.

Again, the higher you go and the bigger the cheque, the longer the list of wanna-haves grow, all the way up to where you can flash your techno kulcha with wireless audio streaming, iPod controls and dual-zone climate control… stuff you would normally expect to find in an upmarket German saloon, not in a load-carrying chunk of metal originally created as an agricultural workhorse.

The same goes for cabin comfort, particularly when it comes to leg, shoulder and head space for rear-seat passengers in the double cabs.

In terms of looks, ride, power, comfort and general appeal the new Ford Ranger is going to change hearts and minds in a big way in this country – and many a nightmare for the opposition, particularly if you factor in a four-year/120 000km warranty and a five-year/90 000km service plan which is standard across the range.

Footnote: Sadly the severe floods in Thailand, where many of Ford’s components are made, have put back the general release and availability of the Ranger from immediately to some time in the first quarter next year. This will also affect Ranger sales in Europe because the Ranger is manufactured in South Africa for 148 markets globally.