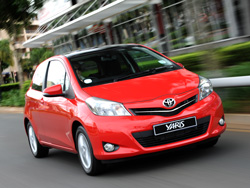 As a motoring scribe my work involves driving some of the sexiest, fastest and most desirable cars on the planet, but it also means that I regularly have to enter the bottom feeder end of the market to drive small, often a tad silly, budget commuter prams with coffee mill engines. Yet, strangely enough, it’s in this market segment where unexpected pleasant surprises pop up every now and then

A typical example is the spanking new Yaris which, in his previous rather drab Toyota guise, was hardly pretty or exciting. Now Toyota has stunned the market by launching a revamped Yaris which is a smart little car with cocky European styling, fancy features and the level of driving dynamics one would normally expect from a larger, pricier car.

OK, initially it might seem a tad on the pricey side, but then it has a heck of a lot to offer… things you would not normally find as standard kit on other cars in this class. Factor these in and suddenly the Yaris becomes a very attractive proposition.

The original Yaris, in spite of its ho-hum boxy shape, crawled deep into South African hearts very quickly, selling 11 000 units in the six months after its local introduction. Think that’s impressive? Watch this new baby boogie off the dealership floors!

The biggest problem for prospective buyers is selecting a model because there is a staggering range of both three-door and five-door options to choose from – six 1,0-litre engine variants priced between R124 000 to R157 900 and seven models with 1,3-litre engines costing between R157 000 and R200 600.

I drove both versions at the media launch from Durban’s King Shaka airport to Eston, Toyota’s private test track not too far from Pietermaritzburg, where I then spent most of the day whipping through a twisty course, then a high-speed track which included rapid lane changes and an emergency stop, and from there on to a slippery off-course track seemingly designed for rally cars – and to say I was impressed would be putting it mildly.

Quite simply put: this is an outstanding small car with good looks, a big heart, as well as attitude and ability to match.

The first good impression the Yaris makes is with its completely re-shaped ‘face’ with stand-out features such as elegant headlight clusters, silver grille, low and deep air intakes and large, single windshield wiper (complete with a built-in ‘spray’ system on the base of the blade).

From the side it has a cool sporty look with a new sloping belt line running the length of the vehicle, larger windows and slanting rear pillar, nicely arched to make it look more like an zippy European car and 15-inch alloys (on the top of the range variants). Remove the Toyota badge and it would be difficult to identify this new Yaris with the rest of its Japanese clan, particularly if it is dressed in one of the five new colour options, including Lava Red, Mint Cream and quite aptly, Bubblegum Metallic (because this baby is going to pull many young buyers who probably never considered buying a Toyota before).

Step inside into what Toyota calls its “fun-to-drive” cockpit and check out the extra space, soft-padded dash, gun-metal and silver trim, new analogue instruments, re-designed seats, a boot which has almost 50% bigger than the previous model, hidden storage boxes, front door and seat back pockets and you almost hear brrm-brrm before turning the ignition on.

Fire up and the jazzed up 1-litre gurgles happily and the all-new 1,3-litre sounds (and feels) even livelier….nothing coffee mill about these small engines which kick out 51kW and 93Nm and 73kW and 125Nm respectively.

The smaller engine is linked to a five-speed manual and the bigger model has an extra cog in its manual box (which really is a bit of a fashion statement and not entirely necessary). There is also an optional choice of CVT transmission which has a manual override with the driver being able to select using either the gearshift lever or flappy paddles on the steering wheel. Left in standard sequential seven-mode the bigger model will do the zero to 100km/h dash in a not too sleepy 12,6 seconds.

What’s more, the new Yaris is bang-on in line with international ‘go greener’ trends with a six percent improvement in fuel consumption (5,1 litres/100km, which make sit the most fuel-efficient vehicle in the B segment) and emissions of only 19g/km which places the smaller-engined models below the emission tax threshold of 120g/km.

To keep you on your best tree-hugging behaviour a gear shift indicator waves its finger at the driver advising when it’s time to change gears to obtain the best fuel consumption. Fortunately it is a clever (and silent!) encouragement, not like loud, nagging seat belt reminders, baarp-baarp car locks, or flashing red light warnings when doors, boot or fuel cap are not closed properly.

Out on the road (and particularly on the test track) both engines feel nippy enough, although we were quite close to the coast. Up on the energy-sapping badlands of Jozi it will obviously not feel as sprightly as down in the fresh sea-breeze.

Not only do the engines feel lively but the ride is also surprisingly confident, particularly when you bully the new Yaris in the corners. It hugs the tar affectionately and the steering has slightly more feel than the previous models, in spite of the fact that is an EPS (electric power steering) set-up.

With previous model setting the trend the new Yaris also proudly wears a EuroNCAP safety badge, thanks to side impact bars, up to seven airbags (including side and a driver’s knee airbag) and, on the top models, whiplash reducing seats.

All the bells and whistles

To this you can add chrome door handles, front power windows and on the more expensive models, tinted windows, a touch screen audio system which includes Bluetooth, rain sensors rear spoiler, climate control and on the flashy 1,3 Xr three-door model even a panoramic glass moon roof.

Overall this first-class Toyota supermini is well-built, comfortable, good-looking and fun to drive and it is going to give the brand a good shove up the new car sales chart. It is undoubtedly one of the most exciting small cars Toyota has launched in this country for a long time.

Like all Toyota models the latest Yaris comes with a four-year/60 000km service plan, a three-year/100 000km warranty plus a 24-hour roadside assistance plan.

With a small car as good as this there is tremendous scope for adding a really punchy model to the range, so how about it Toyota? A peppy Yaris with a prominent ‘ga-tuned’ badge on its bum and with performance to match will open up a whole new buyer segment and instil some REAL excitement into the brand.

Another thing for the marque’s Japanese while coats to ponder; how about a diesel engine choice? We’ve all heard the oft-repeated excuse of our local low-grade diesel but if many other brands can live with crappy South African diesel without too many hassles surely it’s time for Toyota to seriously reconsider its stanch?