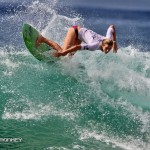 Looking for a surfing holiday along the Garden Route?

A world class surf holiday can be found at any of the number of surf camps along South Africa’s famous Garden Route. Stretching for about 150 miles (241 kilometers), this lush expanse of land runs from Heidelberg in the Western Cape to the Storms River.

With ten nature reserves, there is a wide range of animals spanning the many forests, the wetlands and the fynbos, or the African shrub-land.

Surf camp visitors will see dolphins and seals swimming the shoreline while lucky surf travelers will even see the endangered Southern Right Whale, which comes to calve in the winter and spring.

What about the climate along the Garden Route?

Garden Route surf camps have the second mildest climate in the world. According to the Guinness Book of World Records, only Hawaii beats the Garden Route in terms of mild climates. It is warm and pleasant along the coast.

Although the region claims 320 days of sunshine per year, Garden Route surf camps also feature the most rain in South Africa. With rain falling year round, the wet season peaks in the spring, thanks in part to the moist winds rising from the Indian Ocean. ?However, surf camp visitors need not worry; most of the rain falls at night in the Garden Route.

Where are the best surf spots along the Garden Route?

Surf camps along the Garden Route are near hundreds of surf spots. Surf travelers will see one break after another all along the shoreline.

Some of the best surf spots are found near Victoria Bay, Knysna and Plettenberg Bay.

Victoria Bay, known as Vic Bay, is a a narrow bay which has multiple spots for every level of surfer and feature decent waves all year.

Mossel Bay’s main wave is the Outer Pool. Surging and boiling, this spot can get dangerous when the swells get big.

Kynsna features Bufffalo Bay, one of the most popular surf spots on the Garden Route. Breaking right and left, Buffalo Bay is hollow and fast, reaching heights of up to eight feet (2.5 meters).

Plettenberg Bay is a desired surf spot in itself. Featuring consistent swells all year, surfers should look to the Wreck for good waves.

Sportbay has many more Garden Route surf camps to discover.