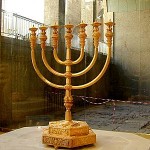 The Garden Route area, some 250 miles east of Cape Town, comprises the towns of George, Knysna, the Wilderness andPlettenberg Bay. It is surrounded by forests and mountain on one side and the Indian Oceanon the other. Jews originally moved into the area near the end of the 19th century.

From the late 1980s, Plettenberg Bay and Knysna have experienced a Jewish revival following a decline over many years, with more than 500 families now living in the area and hundreds more frequenting holiday homes and resorts there in the summer. The Oudtshoorn Jewish community, numbering several hundred at the start of World War 1, now has only 16 families.

Myron Rabinowitz, chairman of the George Hebrew Congregation, also is the Garden Route Jewish Association chairman. He drew the analogy of “taking the Jews out of the Wilderness” and approached the neighboring Jewish communities in 2007, when he was given the mandate to draw up a constitution.

Rabbi Moshe Silberhaft, known as “the Traveling Rabbi,” and Mary Kluk, the national chairman of the Jewish Board of Deputies, approved the new body.