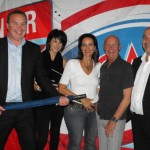 The whole day-time team will be at Freedom Park in the centre of George from six in the morning to seven that evening “to give the community the opportunity to meet our presenters, producers and the team that supports them,” says Algoa FM managing director Dave Tiltmann.

Local celebrities who will be interviewed on the Morning Show include Elvis Blue and Barry Richards. Esther Watson, the event director of the Outeniqua Wheelchair Challenge will also be on air to make a special announcement.

The Morning Team will also be talking to pupils from local schools, while the “Hit Squad” will be handing out promotional items.