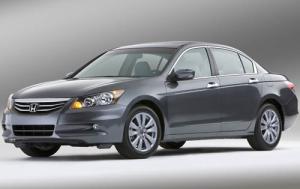 My Festive Season transport was a rather big Japanese sleigh which was spacious enough to accommodate a large Father Christmas and three equally portly assistant present distributors and comfortable enough to bring them all the way from the North Pole to Cape Town – AND it had enough luggage space for all the presents for an entire suburb.

Instead of reindeers this modern-day sleigh, namely the new Honda Accord, glided along with the help of a team of horses cleverly hidden under the bonnet and disguised as 148kW and 234Nm. What’s more, this particular sleigh was much faster than Santa’s old jalopy, galloping from 0-100km/h in about 8.1 seconds and on to an impressive 227km/h.

Our Christmas sleigh was armed with a five-speed automatic gearbox and it was a tad thirsty, though considering the size of this chariot and the haste with which this particular Santa was travelling most of the time, the 10.3 litres/100km was not so bad after all.

What made this sleigh such a preferred mode of transport was its range of safety feature of which even Father Christmas can only dream. It has six airbags, ABS brakes, distance control (which, with the assistance of radar, will keep you a safe distance from the vehicles in front of you), a system that warns you when to brake if the traffic comes to a sudden halt (and will tighten your seat belt if it senses that you are not slowing down and then, in the final phase will even throw out the anchors to slow you down). What’s more, this sleigh has a system which will keep you on the straight and narrow, self correcting the steering wheel if you drift over the central white line and even lights that turn when cornering.

The fancy sleigh I have described above is one of the flagship models of the recently revamped 14-variant Honda Accord range, being the 2.4i-VTEC Exclusive.

I have always liked Honda vehicles ingeneral, and the big family sedan Accord in particular, because they feel and look solid and well screwed together and they are hugely comfortable and reliable. Add the fact that the brand has an excellent reputation for good after-sales service and you have a winning combination which, even at a rather steep R404 900, represents good value for money.

The latest Accord range was given a complete make-over a couple of months ago and the inside, in particular, now looks rather grand with full leather seats, smartly stitched in grey. Not only do they look smart but as back and bum comforters the seats are of the best in the business.

Besides being such a comfortable car the Accord has also been prettied up inside with handsome aluminium inserts and trim that now livens up the interior, as does the extra light via an adjustable, electric sunroof.

With friends visiting from theUKwe travelled several hundred kilometres with four adults and all our luggage on board, plus enough food, wine, and all the other paraphernalia required for a stay in a remote self-catering cottage and it was nothing but bliss – even on patches of really rocky-yukkie gravel back oads.

Honda has done some good work on isolating the cabin against intrusive outside noises and the Accord glides as smoothly as Santa’s sleigh on snow though the suspension sounds a little thumpy when the going becomes a bit choppy.

The Accord range is available in three specification ranges and our test vehicle was the Exclusive version which brags with an impressive range of bells and whistles such as elegant alloy wheels, HID headlights, dual-zone climate control and heated front seats.

To this list you can add cruise control, a sunglasses holder, eight-way electrically adjustable front seats with a driver’s-side memory function, steering wheel-mounted satellite controls for the sound system, Bluetooth phone connectivity, a USB/iPod connector for the sound system. If that weren’t all, there are rain-sensing windscreen wipers, automatic bi-Xenon headlights with Active Cornering Lighting and High Beam Support System, front and rear parking sensors and a premium audio system with 10 speakers and a subwoofer. Someone please pass Santa the box of tissues…

The outside of the big Honda has also been sharpened up with changes to the bumpers and headlights (which now bi-Xenon Active Cornering Lights and High Beam Support System to improve night time visibility), revised reversing light and indicators, and some attractive new bits of chrome trim. Buyers now also have the choice of three new Accord colours – Alabaster Silver, Graphite Lustre Metallic, and Celestial Blue Pearl.

Looks and comfort aside, the Accord also scores well is in the ride department where the clever Japanese engineers have done some fancy work with damper settings to give the big car a pleasantly confident cling, even when the going becomes a bit enthusiastic.

One of the special features I really enjoyed in the Accord is its new Adaptive Cruise Control (ACC). It is made up of high-tech wizardry which, in simple English, boils down to normal cruise control as we know it plus also being able to automatically control the car’s speed and distance relative to the vehicle up ahead in the same lane.

When the distance to the car in front falls below a predetermined value (a choice of three following distances can be selected by the driver), the system instantly decelerates the car through throttle control, and if necessary, by braking.

In instances where quicker deceleration is required, such as when the car up ahead brakes suddenly, the system will provide an audible and a visual warning, prompting the driver to apply the brakes.

If the car in front changes lane or increases speed again, then the system will increase the speed back to the predetermined value. ACC operates at speeds between 30 and 180km/h.

This Clever Dick system feels a bit spooky at first but once you get used to it is impressive and not at all as intrusive as it may sound. Certainly a good safety feature for dozy South African drivers whogenerally fail to increase their following distances in rain or poor visibility and dangerously irritating taxi drivers who persist in tail-gating (you only have to travel to or from Cape Town International Airport during rush hour on any week day to see them at their very worst!).

The Accord is the sort of car I could happily live with even though, like all cars, it does have a few minor irritations – such as a buttons on the key fob that don’t always work the first time when you want to unlock doors or open the boot, its thirst for expensive pump juice and intrusive suspension noise.

But hey, even Santa’s reindeers play up some times, don’t they?