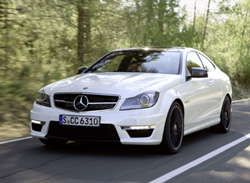 Factoring in the total sales reported by Great Wall Motors of 6545 units for calendar 2011 the total South African new vehicle market last year would have been around 578 000 vehicles.

Factoring in a conservative estimate of Mercedes-Benz’ December sales the total market for December last year would have been around 45 200 vehicles or an estimated improvement of around 14.5% on the corresponding month last year.

Less positive however – and probably due to Europe’s declining economy – December 2011 export sales, excluding Mercedes figures, at 13 665 units reflected a decline of 38.3% or a fall of 8492 vehicles compared to the 22 157 vehicles exported in December 2010.

Good sales, but still below the record

One should also bear in mind that the higher aggregate industry sales for 2011 were still well below the record total domestic market of 714 315 vehicles sold in 2006.

According to NAAMSA, the National Association of Automobile Manufacturers of South Africa, 2011 was a year of relatively solid growth although trading conditions remained intensely competitive with over 60 brands and close on 2200 model derivatives competing for the consumer rand.

According to NAAMSA calculations motor industry new vehicle related sales turnover had grown by about 18%, based on volume increases and a weighted average estimated increase of about 4% in new vehicle prices amounted to about R160bn in 2011.

The used vehicle market was estimated to have reached about 650 000 units which in turn had provided support to the automotive retail and distributive trade.

Export sales performed relatively well during 2011 although the total of 272 000 was below the original projections of more than 300 000 vehicles.

NAAMSA saysSouth Africa’s track-record as a reliable manufacturer and supplier of high-quality vehicles and automotive components to world markets has been firmly established. “The Industry’s export sales performance will, however, depend on the direction of the global economy and the contribution of new export programmes”, a spokesman said. (South Africacurrently exports vehicles to 77 countries).

On the negative side, factors such as rising inflationary pressures, possible increase in interest rates (which, in turn will constrain demand for new vehicles) and the fact that South Africa’s economic performance is inextricably linked to the fortunes of Europe, the United States and Asia, could impact on the industry.

Factoring in the expected improvement in domestic sales together with the anticipated growth in exports, domestic production of motor vehicles in South Africa during 2012 was expected to rise from the approximately 540 500 vehicles produced in 2011 to about 610 000 units in 2012 – an increase in vehicle production of about 13%