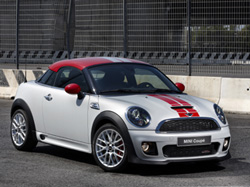 The new Mini Coupé is an absolute neck-twisting, jaw-dropping little beaut – and it not only looks like a chop-top hot rod but it goes like the clappers and sticks to the tar like a hot hatch.

Through the years Minis have always plucked at the soul strings of fuel-blooded drivers but the new Coupé pushes the passion even further and this instant love affair starts the minute you clap eyes on the little rascal. Our test car was toffed out in bright electric blue with a black roof and twin ‘ wanna dice stripes’ (remember those?) running down the bonnet and back luggage lid.

Next to grab our attention was its low-slung roof, not unlike that of the equally striking new Range Rover Evoque. Over-sized alloys wrapped in low profile rubber, a cheeky bee-sting aerial, gaping front air vents and bat-eared side mirrors round off the Mini’s cheeky sporty looks. On the hoof when you hit 80km/h a wing also lifts up from its fold down position above the boot lid to add to the Mini’s already excellent cling.

However, like all Minis down the years the real fun only starts when you fire the new Coupé up and head for a good stretch of twisting road.

From under the bonnet of our standard Mini Coupé growled an enthusiastic 90kW and 160Nm from the tried and tested 1.6-litre engine which delivers power to all five Coupés in the range. Thanks to the relatively small size of the Coupé and the combination of punchy engine and slick six-speed gearbox, this translates to 0-100km/h in nine seconds flat.

Not fast enough to blow your hair away but still oodles of fun when you add go-kart steering, glue-like grip and hardly a hint of break-away front or rear end, even when the tyres are squealing and chirping.

I had the pleasure of a few naughty pre-sunrise runs on seldom-used country roads and battled to get the grin off my face, even long after the second cup of coffee was cold. This latest Mini is Fun and more Fun and I could wish for no better start to 2012.

Although our test car is the slowest of the two automatics in the new Coupé range it still has two little devil buttons: one for turning off the stability control which gave the electronic baby-sitter time off to go shopping, and the other a Sport button which sharpened up output and gearshifts, particularly when you opted to tap-tap through the cogs using the auto lever as gear lever.

We touched on the claimed top speed of 204km/h with relative ease although it was down a long, slightly declining road and we only had the speedometer to believe, no high tech measuring equipment.

Our test car was the entry-level model (if you can describe any Mini Cooper Coupé as such!) and was equipped with an automatic gearbox so imagine, if you can, what the top of the range Mini Cooper S Coupé JCW might feel like with its manual shift, a stepped-up output of 155kW and 260Nm and a zero to 100 sprint time of just 6.4 seconds.

Not that such pleasure comes without pain. Our ‘ordinary’ Mini Cooper Coupé test vehicle already wears an “ouch” price tag of R265 368 but the fastest brat in the pack will set you back a hefty R372 848… serious folding paper in anybody’s wallet.

But performance aside for a minute, the Coupé is as much a comfortable, practical two-seater commuter car as a pleasant driving sizzler and stylish arriving poser.

Good for both front-seat drivers

The cabin is handsomely appointed and happily the trademark BEEG speedometer still sits prominently in the centre of the dash and it’s bright and clear enough for Her Majesty’s critical eyes to check the speed at regular intervals.

For a car of this nature the seats are remarkably comfortable and although the cabin is fairly compact the seats can move back and forth to please even long-legged drivers.

There is slide-in space for small, slim goodies behind the two seats and also a hatch which opens up into a boot which is not too shabby with a 280-liter capacity. Just a pity then that it needs such a strong hand to get the boot lid down and shut again.

Seeing we are now in mild mutter mode, the number of creaks, groans and rattles that come from the rear end of the vehicle is really unacceptable in a smart, expensive new car such as this. I first thought our test car was an exception but I have heard from other Mini Coupé drivers that their vehicles display the same tendency to squeak and rattle.

Another irritation was the sound system which defies logic and requires a study period devoted to the owners’ manual.

Although one understands the need for stiffened suspension to improve roadholding, the Coupé’s undercarriage noise levels can be rather intrusive, particularly on bumpy roads although even swishing up relatively smooth Kloof Nek produced a couple of loud thumps from down below.

But hey, show me a car that’s perfect… and given the choice, what would you rather do, fly in a comfortable Airbus from Cape Town to O R Tambo or in the cockpit of a World War 2 Spitfire?