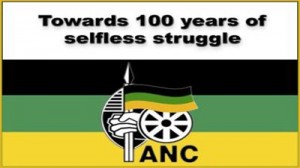 WITH the month of February approaching the hundredth anniversary celebrations of the ANC’s commemoration year move to theWestern Cape Province, after a successful kickoff in Mangaung where the ANC was founded in the Wesleyan Church of Waaihoek.

The ANC National leadership and the National Centenary Task Team, together with theFree Stateleadership of the ANC will hand over the Centenary Flame to the ANC Western Cape leadership.

The ANC invites the people of theWestern Capeand the media to come and join us in our celebrations of 100 years, an achievement that no other political movement on the continent has managed to achieve.

Once the Centenary Flame has been handed over to theWestern Cape, it will travel to all the corners of the province, from the smallest little hamlets and farms, towns to the big cities.

We try our best to make it possible for each and every citizen of theWestern Capeto witness our Centenary Flame of struggle and hope.

Once the torch has been handed over to the ANC Western Cape Province, represented by Marius Fransman (provincial chairperson) it will then be handed over to Mr. Ronnie Klink, ANC Central Karoo Region chairperson.

The Centenary Flame will then change hands from one region to the other, who will each have a turn to present it to a wide range of people and communities in their regions.

From parliament, the flam will be passed on to the Boland Region, who in turn will pass it on to the Overberg Region.

President Makgatho was the president of the ANC from 1917 – 1924, and placed a big emphasis on education, land and religion in his life, as ANC president and in his personal capacity.

On 23 February as part of our centenary celebrations, the ANC will host a Sefako Mapogo Makgatho Memorial Lecture at the Good Hope Centre in Cape Town, to honour the of president Makgatho. President Jacob Zuma will deliver the keynote address and some of the family of president Makgatho will also be in attendance.

President Jacob Zuma will also visit the Rocklands Civic Centre inMitchellsPlainto honour the place where the UDF was launched.

The UDF played an important role in the liberation struggle of South Africa, and the visit by president Zuma is to show our appreciation to that organisation and its millions of members all over South Africa who contributed to bringing about the present democratic dispensation.

On 11 February, former president Nelson Mandela celebrates 22 years of freedom, and this celebration will be commemorated as part of our Centenary Celebrations.

The ANC will be sending a strong delegation to the Drakenstein Prison (formerly Victor Verster) to celebrate this important occasion.

On 24 to 26 February the Commission for Religious and Traditional Affairs will be hosting a summit on Race, Culture and Identity to get a debate going on important issues in South Africa.

Before the handover of the Centenary Flame to Mpumalanga Province, the ANC Western Cape will do its duty and take the flame to Robben Island, a place of incarceration of so many of the freedom fighters of South Africa.

A Candle Light Vigil will be held onRobbenIslandon 28 February, which will end with a cultural evening and dance for all who will be in attendance.

The next day, 29 February the Centenary Flame will be escorted out of the province toMpumalanga, where the ANC Western Cape Chairperson, Marius Fransman will hand back the flame to Mr Gwede Mantashe, the secretarygeneralof the national ANC.

Fransman saysSouth Africais privileged to witness the first centenary of this glorious movement, and therefore, the ANC is doing everything in its power to make it a memorable occasion for all South Africans.