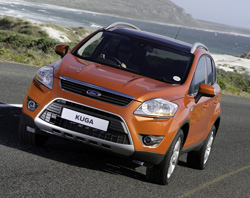 Ford’s quirky and rather controversial Kuga mid-sized SUV has finally arrived in South Africa after it has been dividing opinion in Europe and elsewhere since it first hit the dealer showrooms over there about four years ago.

Though some of the controversial issues have since been sorted, including the rather cheap, plasticky and rather unpleasant interior, its weird love-it-or-hate-it looks remain – and so does the smallish boot.

Certainly the Kuga takes some time getting used to. None of these cross-over type vehicles are really sleek and handsome with their high-rise cabins and the Kuga, too, looks like a gas-guzzling leviathan at first glance. To say nothing of its really ugly derriere, which looks as though it has just been rear-shunted by a bus. But once you get past its on-stilts, lumpish looks all mutters fly out of the window because on the road this 2.5 Duratec turbo-engined all wheel-drive puts up a performance that is hard to believe.

I drove the 147kW/320Nm Titanium version kitted out with a five-speed auto box for a short distance up a steep gravel and sand track on the Somerset-West mountain-side and it seemed completely at ease and capable. I would have loved playing longer with it in more challenging conditions, particularly as some British motoring scribes rate it higher than Land Rover Freelander and others of that ilk.

Not that not too many people who buy cross-overs actually plan to take them deep into Botswana or into the far northern territories of Namibia and beyond. Nope, most city dwellers fall for the designer stubble, tough-guy looks of cross-overs but will seldom or ever stray off tar or way from reasonably good gravel roads – which is precisely where the Kuga loves to show off and charm.
Give it tar, feed it generous doses of expensive forecourt juice and show it a mountain pass and the Kuga will put a huge smile on anybody’s face.

Bearing in mind the Kuga is whipped along by the same eager 2.5 litre five-pot that does duty in the sizzling Focus ST and you begin to get the picture. Furthermore, its underpinnings are almost pure Ford Focus, undoubtedly one of the most dynamic family hatches on the road, so you get a pretty good idea of how well it performs in this department as well.

High-rise vehicles such as the Kuga tend to feel as though they are about to topple over when you show it a rapid corner. Factor in fidgety suspension and a steering feel that is cotton-wool wrapped and it all adds up to low marks in the overall dynamics exam – but not so the Kuga. It hugs the tar with affection, the ride is firm and planted without jump or shudder and the steering is sharper and much more refined than you would expect from anything in this segment.

I must confess…. All my misgivings went out of the Kuga’s exhaust after the first 45 minutes on the road, carefully chosen to give the Kuga space to gallop, winding along Sir Lowry’s Pass, via Grabouw to Villiersdorp, up over the Franschhoek Pass and down Helshoogte to Cape Town International airport – relatively short, but a real surprising eye-opener.
The Kuga arrived in South Africa towards the end of last year in just one guise, the 2.5-litre petrol variant in two specification levels. No diesel, no 2.0-litre, no manual as in Europe – and pricey at R375 000 for the Trend 4×4 AT and R395 000 for the flagship Titanium 4×4 AT.

Almost overnight the mutters began: why only now, after it has been around for almost a whole normal auto life-cycle elsewhere? There are already strong indications of the introduction of a new model, only the timing still has to be finalised and announced. It could be in a year, maybe two. How will this affect the prices of the current model in the second-hand market? These are factors prospective buyers should ponder before signing on the dotted line.

These issues aside, fact remains the Kuga is an extremely attractive option with strong appeal to both men and women and it comes to the market wall-to-wall with a list gizmos and fancy features which add up to tough competition for the likes of the Chevrolet Captiva, Subaru Outback, Kia Sportage, Kia Cerato, Honda CR-V and VW Tiguan.

So let’s start then with one of the Kuga’s most appealing features, its AWD system which operates essentially as an ‘on demand’ rear-wheel-system which will transmit torque to the back wheels as and when required for the best possible traction. Intelligent, too, because it operates without input from the driver.
Feed it takkie and the Ford will gallop gamely to 202km/h but drive it gently and it should give you a fuel consumption of somewhere around 10.3 litres/100km with a ga-ga output of not-too-bad 244g/km.

To match its keenness to trot and hug the road the Kuga is also a sharp stopper, equipped with all the high class degrees of an anti-lock braking system (ABS), electronic brake-force distribution (EBD), electronic stability programme (ESP) with anti-rollover mitigation (ARM) and electronic brake assist (EBA). Throw out the anchors the beast literally slams to a stop in one, two, three seconds flat!

Designed for passenger comfort and driver pleasure the Kuga also brags with nice goodies such as rain-sensitive wipers, dual automatic aircon, rear parking sensors (on the flagship only), cruise control, Bluetooth with voice control, elegant leather seats (heated and six-way electronic adjustable for the driver), power windows and side mirrors. There’s also tinted glass to keep out the glare of the African sun. Both variants ride on macho 17-inch alloys and the Titanium also has a panoramic glass roof.

Not really room for the kitchen sink, but…

Access to the luggage department is via either an upper tailgate section or both tailgate sections at the same time and there is enough storage space for a short stay away but four-up, planning a week away in the bush, will have to dress and pack frugally. There is also some storage space under the back seats.

As a mid-sized SUV the Kuga is pushing into company where the opponents are muscular and experienced, having been around for some time, each with a fairly dedicated band of loyal followers for whom the Ford carrot might not be enticing enough. However, where the Ford could get a helpful boost is if Kuga hitches a ride on the high waves made recently with the local launch of the top notch Ford Ranger bakkies.

Clever back-to-back marketing could do much to reduce whatever negatives there are about the Kuga’s last-minute arrival on the South African motoring stage and what will also help to sugar the pill a lot more, a comprehensive four-year/120 000km warranty, four-year/80 000km service plan and three-year/unlimited roadside assistance plan are included in the Kuga’s purchase price.

Slightly controversial in more ways than one, the Kuga is nevertheless destined to make its mark in the cross-over market in South Africa and, as in Europe, its following is sure to grow from month to month.