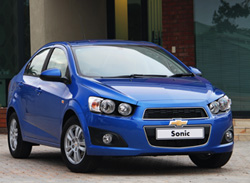 General Motors South Africa has extended its popular Sonic range with the addition of two new sedans, an impressive baby diesel hatch and the first six-speed automatic transmission in the small car segment.

The more mature styled Sonic sedan, available with 1.4-litre or 1.6-litre petrol engines (the latter also offering the choice of an auto box), is aimed at the more mature end of the market.

The new sedans are spacious inside and smart looking, yet sporty enough to also appeal to the younger end of the market.

And now for something very different

Although instantly recognisable by its signature duel port grille with its distinctive “bow-tie” motif the new sedan also has a few stand-out design features such as nifty headlights, styled to look a bit like motorcycle headlamps. They are attractively rounded off in black, chrome, don’t have traditional lens covers, and are way different from just about anything else on the road.

The sedan’s bonnet has a neat creased centreline which stretches into a sloping windscreen. Along with the bulging wheel arches this adds a nice sporty character to the sedan.

The living quarters are typical of Chevrolet’s dual-cockpit theme and it’s both easy on the eye and practical with ample storage space and room for legs and shoulders. The only disappointment is that the front seats – and the driver’s seat in particular – are not fully adjustable, so finding a natural driving position is not too easy if you are smaller or taller than average. In spite of that the seats are actually quite comfortable, as we found when we drove form George via the Scenic Robinson to Oudtshoorn when the new Sonic was shown to the south African motoring Media.

The instrument cluster is neat and intuitive in a combination of analogue and digital although the new Chevy suffers the same disease as so many new cars – in certain sunny, bright conditions the small figures are not always easy to read which is a key factor in a car that is being marketed to the more senior end of the buyer’s market.

The sedan sits well on the road and the cabin is well insulated against outside noises although suspension thumps do penetrate when the going gets a bit rough.

The quality of the finishings in the cabin looks and feels good, almost as though they belong in a vehicle with a higher price tag.

The two new sedans perform well and ride with more than a modicum of confidence, even when pushed fairly hard through the twisties.

At the model introduction I drove both the 1.4 and 1.6 petrol powered variants, the smaller-engined model with a five-speed manual box and the 1.6 with the auto shift, and both felt nippy enough on the level but a tad out of breath on long, steepish inclines. I suspect when fully loaded with passengers and baggage the going might be tad strained, particularly up on the Reef.

Of the two model choices I actually preferred the smaller manual model for the service it delivers and for its price.

However, by far the star of the Sonic Show is the new baby 1.3-litre diesel – an absolutely astounding hatch that is going to set the small market alight.

It’s nippy, cheeky looking and handles really well. The small oil-burner kicks out 74kw and 210Nm and GMSA says it will return a fuel consumption of just 4.6 litres/100km in the combined cycle under test conditions, which is 1.2-litres less than the smallest petrol powered Sonic!

The common rail diesel is armed with variable vane turbo and intercooler and it feels eager to squirt away although it does require fairly high revs to put it into real sporty mode. The manual cog-box is also perfectly matched to the engine’s performance, in addition to being slick and quick.

Probably thanks to the heavier weight of the diesel power mill the smallest of the new variants feel the steadiest of the three newbies. The boxy body is rigid, the ride is comfortable, but firm without being bouncy, and the steering is surprisingly direct for such a small car.

In addition, not only does it gallop gamely, its stopping power is just as impressive thanks in main to quick responding ABS brakes with EBD (Electronic Brake Force Distribution).

On the safety front the new Sonics are equipped with driver and passenger airbag protection, including side airbags. A pedal release system offers added protection for the driver’s lower leg area. In the event of a severe frontal impact is designed to collapse away from the driver’s feet and legs to prevent them from being trapped between the pedals and the vehicle body.

Overall the three new Sonics are perfect city cars and comfortable enough for long drives. Practical, easy on the pocket and smart enough to stand out they are going to push up sales figures in spite of the fact that they are fighting for market share against some highly regarded veterans.

Both the 1.4 and 1.6 models are good choices, but in spite of the fact that I have never been a diesel fan – and its price tag, which is the heaviest in the whole Sonic hatch range – the new Sonic hatch 1.3 diesel would be my first choice any day.

The small oil-burner kicks out 74kw and 210Nm and GMSA says it will return a fuel consumption of just 4.6 litres/100km in the combined cycle under test conditions.

The Chevrolet Sonic is covered by a 5-year/120 000km warranty with roadside assistance for the full warranty period. The anti-corrosion warranty provides cover for 5 years with no limit on kilometres driven

The full Sonic range and prices, which include a 5-year/120 000km warranty with roadside assistance for the full warranty period, are: