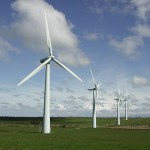 This is the third article about the proposed wind farms in theWestern Cape. For those of you who use the earlier articles to light a braai or those Natal graduates who used it to roll a zol, the story is that the Council for Scientific and Industrial Research (CSIR) has completed an environmental- impact assessment (EIA), which evaluates the impact of putting up 70 wind turbines along the Garden Route.

Specifically, an organisation called InnoWind is proposing to establish four commercial wind energy facilities near the towns of Swellendam,Heidelberg, Albertinia andMosselBay, in theWestern Cape. The project would consist of about 70 turbines of up to 3 MW capacity each. It is estimated that there would be ten turbines near Swellendam, another ten nearHeidelberg, six near Albertinia and 44 nearMosselBay. The combined generation capacity would be about 210 MW.

You may think this just amounts to a few terribly sweet, twee slightly oversize-looking windmeul pompe which dot our rural landscape. Oh, so wrong. These turbines have a hub height of about 60 m to 100 m and a blade diameter of between 70 m and 112 m. The distance from the ground to the top of the blade will be between 95 m and 156 m. For the 95 m turbines, each turbine plus blades will be taller than all but 35 buildings in the whole ofSouth Africa. The 156 m turbines will only be topped by the Carlton Centre and Ponte, inJohannesburg, and will be way taller than any building inCape Town,PretoriaorDurban.

So, in short, the visual effect on theWestern Capelandscape will be truly awful.

Take the chimneys at the Athlone power station, in Cape Town – the wind turbines will be half again as high, which is about two-thirds the height of the Hillbrow Telkom Tower. And seventy of them – not one or two – all along the most beautiful landscape in the world. What a horrible sight during the day! But they will not be seen at night, will they? Oh, wrong. At night, we will see many red blinking collision-avoidance lights to compete with the starry rural sky . . . just to remind us of the city.

In the two earlier instalments of this columns, I explained why we do not need inter- mittent power generation in theWestern Cape. So now on to other things. Farmers offering land for turbine sites will get a sum of R280 000 a year, escalating at about 7%. Since the turbines cost about $2 126/kW installed, it will be four years before the scheme is cash positive. If, that is, we base it all on kilowatt hours produced.

Is it really worth it? Not on kilowatt hours alone. But the real reason why developers want to stuff up the visual aspects of the Cape is to maintain the right of theUSto pollute. It is all about carbon credits. A carbon credit is created when the equivalent of one ton of carbon dioxide (CO2) is prevented from entering the atmosphere. Each carbon credit has a monetary value that is dependent on the type and origin of the emission reduction produced.

Each carbon credit can be traded on the open market, with the current international spot rates averaging R120/t. Now, if an organisation in the US has to reduce its emissions of CO2 by, say, 200 t/y, then all that has to happen is to erect wind turbines in the Western Cape, which, supposedly, prevents Eskom from emitting a few tons of greenhouse gases, allowing the US to just continue polluting after paying the wind turbine operator.

So, effectively, we are selling theUSthe right to continue polluting by erecting visually appal- ling wind turbines. And, since the Yanks are hardly going to check what energy the turbines actually produce, it won’t matter if the wind turbines are turning or not. More next week.