The first of many ongoing initiatives to be rolled out over the next few months, and in conjunction with the Wilderness Foundation’s ‘Forever Wild’ campaign, Shamwari Group will now work together to help raise awareness and funds to help save the rhino throughout South Africa.

States Dr Ian Player, “In 1953 I did the very first aerial count of the white rhino. There were 437. In 1961 Operation Rhino was launched and they were sent to all the former habitats inSouth Africaand groups of 20 to overseas safari parks. The world population of the white rhino is now about 18 000, but declining swiftly because of the poaching crisis. I am very proud to be part of this initiative.”

To kick start the planned initiatives for 2012, at each of the Shamwari Group properties – Shamwari Game Reserve, Eastern Cape, Sanbona Wildlife Reserve, outside Cape Town and Jock Safari Lodge, Kruger National Park guests can receive a special rate of *R3, 500.00 per person, per night, sharing.  A donation of R100 per person per night qualifies guests for this discounted rate and Shamwari Group will donate R500.00 for every room night sold on this offer.  All proceeds will be donated to the Wilderness Foundation with the donation proceeds audited by Grant Thornton.

Stays will include luxury, five star accommodation, all meals (breakfast, lunch, dinner, high tea), two game drives for every night booked, selected beverages, tourism levy and VAT. *Rates are valid from March to September 2012 (new bookings) Standard terms and conditions apply. All donations are payable at the time of booking, final and non-refundable rate is not combinable with offers currently in the market place. Donations, minimum of R100.00 per person, will not be refundable on cancellation of booking.

The Wilderness Foundation is committed to utilising donations from the Forever Wild campaign as follows:

To support law enforcement agencies with equipment required to enhance their capabilities.

Comments Joe Cloete, Shamwari Group General Manager, “Time is now running out.  We all need to stand together to ensure that we are proactive in putting action plans together for the protection of this very rare species.  We are encouraging all our guests in the Shamwari Group to join us in partnering with the Wilderness Foundation in the Forever Wild campaign. We will not get a second chance.”

Please visit www.shamwarigroup.com  or visit us on Facebook to track the proceeds.

South Africais custodian to over 80% of the world’s rhinos.  In 2010 alone, 333 rhinos were killed inSouth Africaby poachers for their horns. In 2011 over 448 rhinos were poached (more than one per day).  It has been proven that the horn has no medicinal value and is not a cure for cancer. However it is still sought after, mainly in the East.  The killing will only stop when we all stand together to protect & educate. 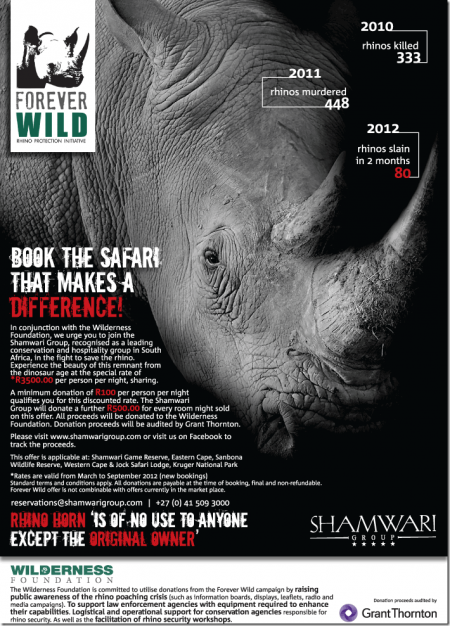