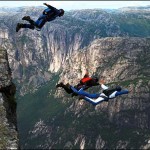 BASE jumper – whose name has not yet been determined – was injured when climbing out of the Bloukrans Gorge this morning.

The jumper – one of a group of three who had earlier successfully parachuted off the Bloukrans Bridge – seems to have grabbed onto a boulder during the ascent out of the gorge; the boulder then dislodged itself, and landed on his arm.

Information immediately available was that an injury to the arm bled for about 15 minutes, and that, once the bleeding stopped of its own accord, the arm began to swell. This could indicate a break.

A Search and Rescue team of the Mountain Club of South Africa (under the leadership of Plettenberg Bay’s Rogan Hindmarch) has lifted the injured person from the pathway.

“At 8:48 this morning I was contacted by Garth Solomons of Face Adrenalin alerting us to the incident and requesting assistance,” said Mr. Hindmarch.

“I activated the relevant Metro authorities and arranged for air extraction of the patient by the South african Air Force.

“A SAAF BK117 helicopter arrived on the scene at approx 11:15. One of my fellow technical rescuers, a metro paramedic, and I boarded the aircraft and flew down into the gorge.

“The pilot was able to successfully land the aircraft in the gorge, and the medic tended to the patient and applied the necessary trauma treatment.

“At 11:49 the patient was transferred to a waiting ambulance and ws then taken to the nearest hospital for further treatment.”

Chris Upton, one of the owners of Face Adrenalin, which offers bungy jumping at Bloukrans Bridge, said that the incident was not linked to Face Adrenalin’s operation in any way.

“Nevertheless, we are on site, and, of course, we helped where we could.”

He said that BASE jumping is not related to bungy jumping.

“We’ve already have had calls asking us about our safety procedures, but BASE jumping is very different to bungy jumping, and the two sports use completely different equipment.”

“In bungy jumping, you’re attached to an elasticised bungy cord, and you jump under the supervision of a highly trained crew with, in our case, at least four safety officers to check you and your rig at every stage of the adventure.

“In BASE jumping, though, you free jump with the aid of either a parachute or a wing suit.”

Mr. Upton said that BASE is an acronym representing the four categories of fixed objects from which one can BASE jump – Buildings, Aerials, Spans (or bridges), and Earth (or cliffs).

“As convenor of the Mountain Club of South Africa South Cape Search And Rescue Unit I can confirm that the incident was not related to any activity of the bungy jumping operation.

“The patient successfully completed his BASE jump into the gorge and injured himself whilst climbing out.

He stressed that the rescue was a team effort.

“I want to thank the South African Air Force for helping to make the evacuation quickly and efficiently,” he said.

For information about Face Adrenalin: