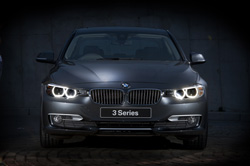 BMW has taken another stride closer to premium sedan heaven with its new 3 Series launched in South Africa this week. The outgoing model was already the best driver car in its class but the latest version is an even more pleasing mix of Levi and Hugo Boss.

Slightly menacing, but man, what a car!

The new 3 Series has matured and improved in almost every department – looks, performance, handling, technology, comfort, ride, safety and environmental friendliness to stride as a dynamic sedan, yet again, ahead of the likes of Volvo, Lexus, Audi, Jaguar and Mercedes.

Like it’s outgoing 3 Series range of 27 models the newly unveiled range offers an incredibly wide choice of models, options, extras and prices so it is difficult to know where to start other than to suggest that potential buyers do a little home-work first then go along to the nearest BMW dealer and get the sales staff to guide you through the choices of manual or auto transmissions, engines, features and the differences and benefits of opting for Sport Line, Modern Line or Luxury Line.

Just to give some indication of roughly what buyers are in for, initially there are four basic models to start with: two 320 options (one petrol and one diesel), a stepped up 328i (all three of them powered by two-litre, four cylinder engines) plus a 335i three-litre, six-cylinder model with prices starting at R361 000 and going north to R543 000 for the flagship. But be warned: these prices are for absolutely standard cars and you will pay for every additional fancy bit of extra kit.

Although the new Three has been vastly improved it doesn’t look dramatically different from the outgoing model, but certainly more executive, refined and sporty. The clever white coats tweaked the headlights and trademark kidney grille, trimmed a bit of body fat here and there but mainly focussed on comfort, roadholding, emissions, cabin design, technology and improving power, performance and grip.

At the Media introduction to the 3 Series, which is built in BMW’s Rosslyn plant outside Pretoria, I drove the two 320 models on quiet stretches of rural tar roads which weregenerally in remarkably good condition so that we could be quite enthusiastic with loud pedal applications.

The first striking feature of these two newbies is its sophisticated ride. Gone are the bump and thump hard ride of the previous 320 and in its place is a car that glides much more elegantly along and retains its dignity even when driven like just being stolen.

Both models kick out 135kW but the diesel has 20 more Nm at 290Nm than the petrol. Both cars will top out at about 235km/h but the diesel’s appeal lies in its lovely low-down grunt. BMW says its 0-100km/h dash time is just a fraction slower than the petrol version’s 7.3 seconds.

Although not really a diesel fan I really liked this new 320d. It pulls like a freight train and somehow it also felt smoother on the road than the petrol version, even though both models again trot on runflat rubber that is not exactly made for soft, pleasant travel.

One thing BMW has always done better than the rest is its on-road performance and this new 3 Series is an absolute delight to drive rapidly. The steering is as sharp, if not even a tad sharper, than the outgoing model. Point it in a direction and that is precisely where it will go.

A delightful feature across the range is a press-of-a-button choice of four driving mode settings to change the car’s character from Sunday sedate and manicured nails to Saturday night snarl and sharp claws. Left in economy it will waft along with the same luxurious feeling of its lager 5 and 5 Series siblings, but flick to sport and the lights go out and the race is on. Everything tightens up and becomes quicker and more direct – and a lot of fun. Suddenly the steering is sharper, throttle response speeds up and gear shifts happen quicker.

Stop-start, which irritates some drivers and pleases others, is standard across the new range of Beemers, as are head-up display, lane change and lane departure warnings, active cruise control, bags and bags of high- tech sound, connect and plug-in, press and play stuff so best scan the net or go grab a brochure to wade through.

The cabin is refined and comfortable, even in the back, with ample leg and shoulder room, even for the Matfields of the world.

You can take your pick of features, but each one will cost you extra.click to enlarge

On our extensive drive through the low-traffic Gauteng Platteland and congested rush-hour suburbs and motorways, the new 3 series cars we drove showed their flexibility…. Smooth and easy in the traffic and immaculately behaved under the whip.

However, BMW reserved the real surprise for the second day of the Media launch when we were let loose on the tight and technical Zwartkops race circuit in the new 328i

There really is no better or safer environment to push a car to its limits than on a race track and even as the rain started spoiling things the latest 328i kept its pose. Initially a little wary of the new four-cylinder 2-litre turbo engine which has replaced the magnificent 6-cylinder which did duty in the outgoing 330i I was blown out of the water by this new car.

The “baby” 2-litre is absolutely stunning. It effortlessly blasts out 180kW and 350Nm and the power is on tap from the second you tickle the loud pedal. As you exit the pit lane it scooted from 0-100km/h in less than six seconds and although we couldn’t reach the governed 250km/h on the short straight it galloped along with real enthusiasm.

A little wary of selecting the Sport Plus option on a wet track (which gives the guardian angel traction control the day off) I whipped around in Sport mode which was more than rapid enough and when the electronic nanny did interfere she did so gently and without wanting to take full control.

Every now and then along comes a car that just feels right and this new 328i succeeds in hitting all the sweet spots. Never before has the 3 Series worn the sports sedan look so well, so cheers to BMW’s clever white coats inGermanyand Herzlichen Glueckwunsch!