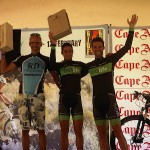 Some may have called stage two “a fun day out”, but today was payback time. Stage three took riders from Robertson to Caledon – 147km with 2 900m of climbing. Dr. Evil cited four major climbs on the longest stage in Absa Cape Epic history, with the action starting around the 40-kilometre mark. The first was a six-kilometre dual track, where riders fought for traction over large rolling rocks. Then there was the four-kilometre Mast climb, with a view over Villiersdorp. The next lump in the profile was a smooth and comparatively easy rise to the Toll House, the highest point of the day, with a fast five-kilometre descent dropping 500 metres into the valley. At the 110-kilometre mark, there was the UFO climb to scale. A sharp rise was followed by a tricky descent, undoing all the hard work. Then starting again, from the bottom, was a steep rocky trail with several false peaks where riders switched to their granny gears. Riders could clock up some mileage on the fast downhill district roads before the last 10 kilometres slowed them down again, traversing farmlands. Riders were then welcomed to their new race village – Caledon.

Stander and Sauser still lead this category by 18 minutes and 35 seconds. Urs Huber and Konny Looser of Stöckli Pro are placed second overall (15:56.08,9) with Alban Lakata and Robert Mennen of Topeak Ergon Racing third overall (15:56.31,5). Karl Platt and Stefan Sahm of the Bulls 1 team are in fourth place overall (15:59.27,7), with Kevin Evans and David George moving up two positions to seventh place overall (16:01.51,4).

The Absa African Leader jersey was won by Kevin Evans and David George of 360Life, with the MTN Qhubeka team of Adrien Nyontshuti and Jacques Janse van Rensburg moving into second position in this category (16:13.39,3).

Siphosenkosi Madolo and Azukile Simayile of Exxaro Academy 9 are the leaders in the Exxaro Development jersey category.

Says Christoph Sauser of Team 36ONE-Songo-Specialized: “Every stage is great to win, whether it’s the longest stage or not. But we not only won the stage today, we took another big step in our overall lead. Today was a beautiful stage. On top of the mountain the scenery was really special. I almost wanted to stop, but a victory means more than great scenery. We expected some cat-and-mouse games for the finish so I just decided to attack and see what happens. I expected some real sprinting action, but was disappointed.” Adds team mate Burry Stander: “I was relieved when Christoph went on the attack for the finish, because when it comes to sprinting, he’s not really that good at it. So I had only to beat one of the two 360Life riders for the stage win. I know there’s some people who will wonder why we didn’t give the stage win away, but the Cape Epic is not the place to give gifts. We deserved the win today. We love winning stages and we’re always at the start line with victory in mind. I was really nervous about this stage at the start this morning because I’m focusing on the Olympic Games and there it’s cross-country racing that is less than two hours. I haven’t been training for long races like this, but I’m more than happy with the way it’s going at the moment.”

Says David George of 360Life: “Of course it’s good to be back on the podium. We were so close to Burry (Stander) and Susi (Christoph Sauser) and still have a long way to go. We’ll do our utmost to make headway back onto the podium and will keep giving our best every day. Today’s stage was tough, but Kev and I were up to the pace. Hopefully we’ll improve as the days go by. We’re still motivated to keep on getting closer to where we want to be. We had some bad luck in the first stage, but as you know, this race is such a bastard, anything can happen.” Adds Kevin Evans: “Yes, Dr Evil (his father) lived up to his name. There will be a lot of swearing back markers out there today. We had to push during this stage so that we didn’t stay stuck in the same position. I had nothing left at the end and couldn’t sprint to the finish with Burry and Susi. You have to fight for everything in this race. Our goal is to ride ourselves back onto the podium at Lourensford Wine Estate. It’s going to be hard and I don’t know how many days you can put in this kind of effort. Today was a good day for us. We broke away at the 90km mark as it’s a bit frustrating when you ride in a big group and constantly need to fight for position.”

Absa African Leaders for the last two days, MTN Qhubeka, comment on finishing in second place in this category today. Says Jacques Janse van Rensburg: “My wheel kept going flat – I sealed it, then it went flat again. At around the 90km mark, we were in a good position in the second group. The uphills took their toll on me and we decided to ride at our own tempo. At the end, I ran out of energy and we caught up with the third group with Max Knox. It was really nice to be in the African leader jersey for two days. Adrian and I work well as a team – he’s very strong and it’s awesome. Hopefully we recover well and will still get good results.” Adds Adrian Niyontshuti: “It’s a hard race with the best riders in the world. We’ll probably finish in the top 10 only next year.”

Says Siphosenkosi Madolo of Exxaro 9 and winner of the Exxaro Development Jersey: “I had a very hard fall today, but am still very happy to be here at the Cape Epic. The Exxaro Jersey means a lot to us, and it’s an honour to wear it. We have a big lead so today we were just trying to ride conservatively. Tomorrow we’ll be stronger again.” Adds his team mate Azukile Simayile: “It wasn’t a good day for me. I struggled. It was long and hot. Hopefully it will be better tomorrow.”

Says Esther Süss of Wheels4Life: “I’m very happy we could finish in first place. I had a really hard day today. It was a long race, starting off with a big group on what seemed like a road race. After that there were some hard uphills and downhills. We had to do a lot today and it was too long a stage for me. So far we’ve had a lot of open track, so I’m hoping for more single-track the rest of the race. Today was beautiful though – the views of the mountains were magnificent.” Adds her team mate Sally Bigham: “We can’t wish for better result. I enjoyed today’s stage, but didn’t like the first 60 to 80 km. It was too much like a road race and a big peloton of riders together. Once we started to climb, we could start building our lead. There were some really challenging climbs, which I like – especially the long ones. I also didn’t like the last 5km. It was a tough stage, but the kind of stage I enjoy. We have a substantial lead and will just carry on doing what we’re doing. Hopefully we’ll continue to have good luck and enjoy ourselves.”

Says Nico Pfitzenmaier of Robert Daniel Momsen: “Today was a long stage and it was important to consolidate our lead a little bit. We had a very good ride and worked well together. We extended our lead and road conservatively. Anything can happen in the Absa Cape Epic and it’s still a way to go to Lourensford Wine Estate, so we can perhaps take it easier, but still can’t say we won. This is the first time I’m riding in the Masters, and to be quite honest, I find it more relaxing. In the Mixed category, there is much more strain on your body and your knees. Your body is always a bit skew and you have to put in more effort on the hills to support your partner. We’ll see what happens next year.” Adds Rob Sim: “Today was quite hard. We stayed with around 20 teams and at one point, one of the top riders – I think it was Konny Looser – fell and I rode straight into him. I then had to catch up again and lost a bit of puff there. I’m feeling much better than the first day. Nico is a great partner – he’s very strong and also excellent technically. We have a very good partnership going.”

Adrian Enthoven of Jag Craft says it was a very tough stage. “It was a bit deceptive. The first 90km went quickly but the last 50km were really hard. It was good though and we didn’t have any major issues. The other guys were just stronger than us today. It will be very hard to challenge for first place and we’ll just try to hang onto our 2nd place. As always, I’m loving the Absa Cape Epic.”

Says Erik Kleinhans: “A woman rode into my bike today and my tyre went skew. I was a bit nervous when it happened and hoped it wasn’t serious. We were riding in a big bunch and I had to pass the whole field to catch up with Ariane. I’m feeling very strong and am getting stronger every day. Today I felt better than the first three days and it makes a huge difference. This stage was tough and I could help Ariane. We rode with a really nice bunch of people – thanks to Rene Haselbacher, Mannie Heymans and Reynard Tissink.” Adds Ariane Kleinhans: “It was a long day in the office today and I’m tired. I should get paid overtime. I felt good and paced myself quite nicely – the last bit was tough and I needed to concentrate a lot. Also, I think my blood sugar levels were running on empty.”

Two major climbs jab upwards on the day’s route profile. The first is the loose, long and steep Babylonstoren. Then it’s the brutal, stony ascent to Charlie’s Heaven and riders should be used to false peaks by now. Riders will be watching the weather report closely, hoping for some cloud cover to take the edge off the scorching heat. But with views as far as Cape Point and Cape Agulhas, it’ll be worth going through hell to get to the top. Danger lies ahead on the rough, steep ascent, with jagged rocks and deep ruts on this washed-out road. The run into the finish includes open farm roads, fast paths along a railway line, some tight singletrack past the tiny village of Middleton and a few hundred metres of trails through Caledon’s botanical gardens.

Here is some nice insight into the Cape Epic’s water points, A.K.A. aid stations…