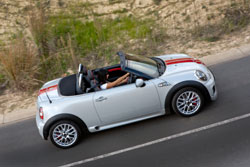 For the first time in its long history the iconic Mini has chopped off its roof, thrown away its back seats, acquired a fold-down cloth top and adopted the name of Roadster – a metamorphosis which has turned a cute and trendy city car into a fully-fledged little sports car.

Price and performance will attract a range of buyers.

True to the sporty heritage of its BMW parent company the Roadster is far from just a little swanker with cosmetically enhanced go-faster looks. Powerful engines and sophisticated chassis technology, a low centre of gravity and a rigid body across the three-model range ensure go-kart cling and sizzling performance, all delightfully multiplied by the compactness of this little el fresco beauty.

At the media introduction, I drove all three the new Roadster variants on sweeping, scenic and speedy stretches of Western Cape country roads, starting off in the Mini Cooper Roadster, then moving on into the S version until eventually sliding in behind the wheel of the John Cooper Works two-seater pocket-rocket.

Each step up on the wind-in-your-hair performance ladder became better and better and it was soon clear that the difference in price and performance will attract a range of buyers varying from young, trendy and probably singles, to slighter older, slightly more performance-minded and status-conscious drivers topping out with those drivers for whom nothing less than the hard-core, tyre-smoking best will do.

One thing I am pleased about is that I went up the performance ladder and not down, because compared to the JCW model the ‘standard’ Cooper feels decidedly pedestrian with its 90kW/160Nm 1.6 engine and performance figures of 0-100km/h in 9.2 seconds and a top speed of 199km/h.

Having said that, it is the least expensive of the three cars, it is just as cute as the other two and, except for the out of sight oily bits, has much of the same fancy kit as them. It handles, as you would expect from a Mini… sharp, predictable and confident. What’s more, it sips only about 5.7 litres/100km and keeps emissions down to 133g/km. This model is perfectly suited to the city commuter; the price is right, it’s fairly frugal and much too trendy and cute-looking to be ignored. I reckon it is likely to appeal to the young and slightly older markets alike.

Add an S behind the Cooper’s name and you get a four-cylinder petrol engine with MINI TwinPower Turbo technology that powers out 135kW and 240Nm (260Nm with overboost) that will do the 0-100km/h dash in 7 seconds and top out at about 227km/h.

Then there is the Big Daddy of the Roadster gang, the Mini John Cooper Works Roadster (to give its full title) that comes armed with TwinPower turbo technology and race track-style tuning which gives it 155kW and 260Nm (280 with overboost from 2000rpm upwards), a 0-100km/h squirt time of 6.5 seconds and a top speed of 237km/h.

This car is boutique-made for drivers who get their kicks when the pleasure pedal is right down on the metal, preferably on track days. Yet, as hot as it is, driving this Roadster on a public road is also genuinely a pleasure. It handles beautifully and unless the tarmac is badly decayed it is not even as jumpy or bumpy as some of its parents’ other offspring.

When just cruising along the JCW’s sporty engine gurgles gently but feed it right-foot sole and it snarls and growls, warning you that this tiny beast wants to do what it does best – go like the clappers. But more than just run, it sticks, it drives like a go-kart and it howls with delight when you whip it. As a price-performance package it is one of the sexiest, most exciting cars I have driven in recent times and that says a lot because the day before taking the wheel of the new Mini Roadster I did some low flying in one of the world’s ultimate track tamers, Nissan’s awesome GT-R.

The Roadster certainly stands out in the looks department, whether its soft top is up or down. It looks remarkably elegant for such a short, stubby car but mainly its shouts out FUN in capital letters. Its funky sportiness is emphasised by a low, crouching stance, attractive sloping windscreen, polished stainless steel roll-over bars, wraparound chrome trim strip at the base of the windows and roof, black border around the lower part of the body, shiny chrome bits strips and sporty alloys (in different sizes for the different models).

But the centre of attraction undoubtedly is the classic British roadster-style black cloth roof that cascades down to fold flat behind the seats. Nice eye candy, along with a range of special Roadster black or silver Sport Stripes (Red is reserved exclusively for the JCW model).

The Roadster certainly stands out in the looks department.

On the hoof, the Roadster’s active rear spoiler extends automatically at 80km/h to add to the fun, cling and sporty appearance.

The interior is jazzed up in typically Mini style, complete with the centrally mounted large speedo and a rev counter positioned directly behind the steering wheel. A wide range of interior sports seats are available, again much depends on the model you opt for. The same goes for trim strips in different colours and even a Chrome Line Interior package.

As with the BMW mother brand, there are numerous optional extras available for the Roadster and much depends on personal taste, bragging rights and degree of credit card meltdown.

The MINI Cooper Roadster and MINI Cooper S Roadster can be specified with an optional six-speed automatic gearbox with Steptronic function as an alternative to the six-speed manual item fitted as standard across the MINI Roadster range. Also available as an option is a sports steering wheel with shift paddles, which enable the driver to change gears manually while keeping both hands on the steering wheel.

A Sport Button on the centre console – standard in the case of the MINI John Cooper Works Roadster and an option on the other models – allows the driver to adjust the car’s steering characteristics and accelerator responses. If the optional six-speed automatic gearbox is specified, pressing the Sport Button also shortens shift times.

Here’s a surprise… a boot that fits

In terms of practicality the Roadster, rather unusually for cars of this nature, offers quite an impressive boot with a 240-litre luggage area which can accommodate a lot more than a week’s shopping bags or naughty weekend away holdalls.

The boot is surprisingly large for such a sporty little car.

Also of huge appeal to today’s always-connected generation will be the pulling powers of a classy audio system with MP3-compatible CD player and AUX IN connection plus a Harman Kardon hi-fi loudspeaker system, MINI navigation system with features such as a Driving Excitement app, web radio, Google services, RSS news feeds, Mission Control and the in-car use of Facebook and Twitter.

A cool cat, this new Roadster: fast, lots of fun, impressive handler, damn pretty, safe, well-connected and ultimately, very, very desirable, even at a price range of between R300 000 and R400 000, give or take a few optional extras.

Come on you darn Lotto bloodsuckers I want a new JCW Roadster very, very badly. Twice a week, for years, I have been buying tickets and all I ask you to do now is to draw my six numbers. Now how difficult can that be?