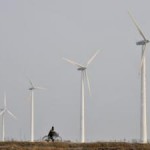 The town council of Swellendam will soon decide on the first application of several for the establishment of wind farms in the Overberg and the resultant change of usage of agricultural land and subdivision of properties. Objections to the proposal must reach the municipality on or before 16 April.

The application by InnoWind (Pty) Ltd involves farms situated adjacent to the R319, a scenic route linking Bredasdorp and the N2.

The farms are owned respectively by the Swartsdam Trust, and the Vryheid Boerdery Trust of which Swellendam’s mayor N G Myburgh is the chairman.

The proposed wind farm will cover an area of approximately 2 400 ha and have ten turbines, earning the owners R50 000 rental a year per turbine, payable in advance. This rental amount is to increase by 10% annually.

InnoWind stated in documents supplied toSwellendamMunicipalityin February 2012 that each turbine will have a hub height of 84 m, a blade diameter of up to 118 m and together will have a maximum electricity generation capacity of 30 MW. The turbine towers will be supported on reinforced concrete foundations of up to 25 m x 25 m x 3 m depth. During construction, an area of 45 x 25 m adjacent to each turbine will be compacted to allow building cranes to operate. Changes to the road network will include the construction of access roads, passing points and turning circles for large trucks.

Cables, running underground where possible, will connect the turbines to the nearby ESKOM  Vryheid  substation. Although Friedlaender Burger & Volkmann Land Surveyors claim on behalf of InnoWind that there is enough space inside the existing substation to accommodate the new transformer and that the substation’s footprint will not be extended, this could change if other applications are approved.

The infrastructure of the facility will include a wind monitoring mast of up to 80 m and an operations and maintenance building.

Seventy-five percent of the R400 million estimated installation cost will be spent outside ofSouth Africa. InnoWind  claims that during the construction period of up to three years, jobs will be created  for 2 700 ‘person-months’ ,  which translates to jobs for 75 people of which only 55 or so will be locally sourced. Local communities will provide 1 500 ‘person months’ for the ‘operational phase’ (the minimum lifespan anticipated for the wind farm is 25 years).

Despite objections of Birdlife SA to this study by the CSIR , the National Department of Environmental Affairs granted authorisation for the establishment of the wind farm on2 November 2011subject to many conditions and provisos.

The department specified that a bird and bat monitoring programme must be implemented prior to the construction of the facility and continue during its operation. Reports must be submitted to the provincial and national environmental departments, Birdlife SouthAfricaand the Endangered Wildlife Trust (EWT).

InnoWind must include various other controlling measures in an amended environmental management plan to be submitted to the department before construction commences. An independent environmental control officer must be appointed and employed until all rehabilitation measures are completed after construction.  Environmental management plans are required for inter alia plant rescue and protection and the control of storm water.  A transportation plan must be developed for the transportation of turbine components and large pieces of equipment.

Objections to the proposed wind farm will probably mainly be based on the fact that the Department of Environmental Affairs authorised the establishment of InnoWind ‘wind energy facility’ on the farms Kluitjeskraal and Uitvlucht instead of  Remainder Farm Vrede No 352, portion 7 (Swartsdam), Farm Vrede No 352 and Portion 4 Farm Uitvlucht No 362, Swellendam.

Further objections will refer to the limited economic advantage to the local population and economy. The creation of semi-industrial sites in otherwise scenic areas will create another blight on the landscape and have a detrimental effect on tourism.

Alert objectors will note that the proposed concrete foundations are much larger (25m x 25mx3m) than those approved by the Department (16m x 16m x 2.5m).

Tourists and regular users of the R319 will object to the inevitable disruption of traffic flow during the 3-year construction period.

People who live in this is a bird rich area, often frequented by the endangered blue crane, South Africa’s national bird,  and home to many other birds, will object to the establishment of the proposed wind farms, even though the Department wishes to monitor the effect of turbines on the bird and bat populations. For all practical purposes the Department is giving approval to the conducting of a giant experiment to establish protocols for a bird monitoring programme for wind energy development in the rest of the country.