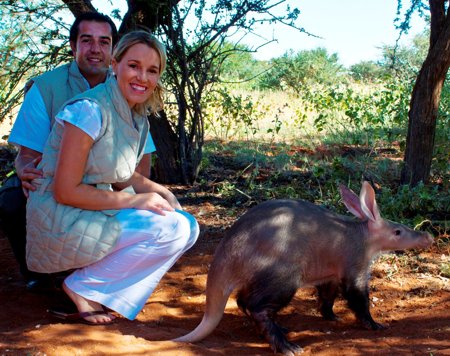 A baby aardvark, the first ever to be captured and released will soon be set free into the wild.

Piglet, rescued over New Year from a farm in Vryburg in the North West province, will soon be released on Tswalu Kalahari Private Game Reserve, which is home to many of these rare animals.

The release will form part of a project which aims to document adaptations of the aardvark for survival in the Kalahari with the ever increasing threat of climate change.  The project was started in August last year by the Apes Institution of the University of Witwatersrand and is one of the many Tswalu Foundation projects underway on the reserve.

The extraordinary story of how the aardvark was found close to death and nursed back to health, was told by Dr Dorianne Elliot, a veterinary surgeon from the Bird andExoticAnimalHospitalat the internationally renownedOnderstepoortVeterinaryAcademicHospital.

When Dr Elliot received a call from a farmer who had rescued an aardvark, she realised it needed urgent, specialised care if it were to survive.  She and a colleague, Dr Lecsi Jacobson, drove 300 kilometres in the middle of the night to collect the animal.

The aardvark was ice cold, almost comatose and extremely thin. “His temperature and blood glucose didn’t even register on our equipment,” explains Dr Elliott.

He was put into an incubator and tube fed for 24 hours a day.

“We nicknamed him ‘the piglet’ as, superstitiously, we never name severely ill animals until they are  stronger. The name stuck,” says Dr Elliot.

On day five Piglet stood up for the first time. The drip was removed on the seventh day. With his oddly shaped mouth, he could not suckle from a normal baby bottle and, after some research and discussion with zoos in the US, the vets purchased a special feeding bottle designed for infants with a cleft palate.

It was a huge milestone when, two weeks later, he accepted the bottle.

The tendons in his front legs were contracted so Drs Elliot and Jacobson took him for a walk every evening to stretch out his legs. Young wild aardvarks walk long distances with their mothers.

During the time Piglet spent with them, Piglet dug a burrow in the garden which eventually measured 9 metres long and 2 metres deep!

At the time of his rescue, Piglet weighed just 3.7kg.  Nearly three months later he weighs over 18kg. He still drinks milk with additives and is not interested in solids.

“We were hoping that he would learn to eat termites at Tswalu, his new home,” says Dr Elliot.

Piglet was flown to Tswalu on the private charter from OR Tambo earlier this month to meet his new adoptive parents, Corli and Joe Schoeman. Joe is Manager of The Motse and Corli, his wife is Spa Manager.

The family instantly connected and Dr Jacobson, who accompanied Piglet on the flight, was happy to hand over to Joe and Corli after two days.

Piglet has his own bedroom in the Schoeman’s house in the staff village on the reserve, and a mattress and duvet that are familiar to him. Their job over the next months will be to wean him off the bottle and onto termites, take him for early evening walks, show him how to break open termite mounds and familiarise him with his new surroundings. He is not yet aware of the dangers of the bush, and will need to learn about them.

It is hoped that, as he starts feeding on termites, he will become more and more independent, and hopefully move off into the bush and become totally wild.

A tracker will be put under his skin when he gets a bit bigger, so that the Tswalu game guides can keep an eye on him.

Managing Director of Tswalu Kalahari, Russel Binks says that Piglet has settled in well to his new home.  “He does not yet have a huge capacity for the great outdoors, but delights in extended siestas! He has his morning bottle, followed by time in the bush, then he finds his way to his new bedroom and gets onto his mattress and goes to sleep.”

He eats six hourly through the night but dozes off immediately he has finished his bottle. He has to be carried outside, a habit started by the vets because he was so weak, which he seems reluctant to give up.

Joe Schoeman, his new father, will begin to lure him outside with his bottle to encourage him to venture out on his own. This freedom will be a major step towards his reintroduction.

Binks says that the release of the young aardvark will be a first anywhere in the country.

“Tswalu is the perfect home for aardvark and we are certain that he will soon find a mate and settle into the bush,” says Binks.  “Our game guides will keep an eye on him and ensure that he is habituated to his new environment before his release. “