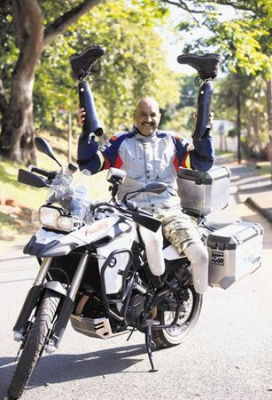 Johannesburg, Gauteng, South Africa (17 April 2012) – Bushy McKelvey, a bilateral amputee, will be attempting a 24 hour Scooter Run on the 24th April 2012 at the Red Star Raceway in Gauteng. The purpose of this immense challenge is to raise funds for the incredible “Out On A Limb” expedition through Africa.

The “Out On A Limb” expedition was initiated by Bushy to raise funds for disabled people by producing a television series for broadcast that documents his travels and experiences by motorbike through 12+ Countries inAfrica. Along the way the team will be visiting and assisting numerous Non-Profit Organizations, who will be showcased in the documentary.

A majority of the sponsorships needed for the expedition have already been covered. For example, 2 4×4’s have been sponsored by Ford, and Jurgens has sponsored an off-road trailer. But there are still certain costs that need to be covered. The Scooter Runs purpose is to raise the funds needed for the fuel, which is budgeted at R160,000. This will be the goal of the fundraiser.

This incredible challenge will start at7amon Tuesday morning and Bushy will attempt to do 375 laps (1500km) around Red Star Raceway in 24 hours on a Vespa sponsored Scooter. He will break only for short rests and drinks. Media stations will be able to contact Bushy during the ride through a cell phone attached to his headset.

The Racetrack contains 13 corners and 3 straights, and the task of completing 375 laps will be an immense test to Bushy’s strength, concentration and stamina.

This challenge, if completed, will break the current world record of longest distance traveled by a Scooter in 24 hours.

Bushy and the “Out On A Limb” organization is asking for donations of R50 in support of the charity drive, or for people and businesses to pledge donations for every Kilometer ridden. Donations can be given via PayPal through the Out On A Limb Facebook page at http://www.facebook.com/OutOnALimbSeries . Pledges can be made by contacting “Out On A Limb” directly.

Johannesburg, Gauteng, South Africa (17 April 2012) – For more information please visit the Facebook page, the website –  http://www.outonalimb.co.za -, or contact the “Out On A Limb” team through the details below: