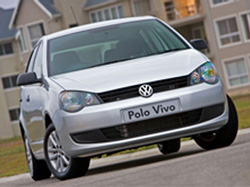 With over 56 000 units sold since its launch in March 2010, Volkswagen’s Polo Vivo continues to be the dominant brand in the passenger car market – a success story that is further enhanced by the fact that it is the only locally produced entry-level volume car on the market.

The model has been the top-selling brand in the South African passenger car market for the past 18 months, despite a flood of new models being launched into the market,

Volkswagen South Africa introduced Polo Vivo to fill the gap that was created when the Citi Golf reached the end of its life span in January 2010.

“The success of Polo Vivo in the past two years has been overwhelming. It is a unique offering that we introduced with the aim of providing our customers with an affordable and reliable product,” said Mike Glendinning, Director: Sales and Marketing, Volkswagen Group South Africa.

“The cornerstones of the Polo Vivo brand are affordability, proven German product quality, safety, space and comfort. It represents excellent value for money without compromising on core product essentials that customers expect from Volkswagen. In short, Polo Vivo customers are getting an A class car for the price of an A0 car, a difficult proposition to ignore in this heavily contested segment of the market.

In addition he said Polo Vivo also has class-leading residual value in its segment in the used car market, making the cost of ownership over a three-year period one of the cheapest cars to own.

Nearly 70% of Polo Vivo parts are sourced from local suppliers. The localisation of parts has resulted in the creation of a number of jobs and the establishment of a Supplier Park in Uitenhage.

The ‘Proudly South Africaness’ of the Polo Vivo has encouraged and attracted government fleet buyers as well as rental companies to list it as their car of choice.

In the past year, Volkswagen introduced additional exciting derivatives to the Polo Vivo range including a sporty two-door Polo Vivo GT.