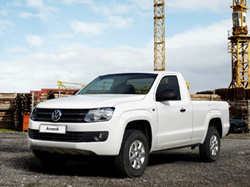 Some of the best off-road jockeys in the country have saddled up Volkswagen Amarok 2.0 TDi steeds and battle has commenced for top honours in the Spirit of Africa 4×4 competition – one of the toughest competitions of its kind on the continent.

Twenty two-man (and women, in some instances) teams will be competing in the opening elimination round at Kondowe Nature Reserve in the Limpopo bushveld near Phalaborwa, closely scrutinised by racing ace Sarel van der Merwe who also devised the course lay-out.

Once all the competing groups have completed the elimination process the finalists head for the finals inBotswanawhere the winner will be decided.

“There are some changes this year in addition to the new venue,” said “Supervan” the multiple national rally and circuit racing champion and international sports car racer. “Our objective has always been not only to provide a real test of man and machine in the toughest of African conditions, but also to explore some of the beautiful and more remote parts of our country while at the same time bringing economic benefits to the communities where we visit. In the process we have always emphasised the need to ‘tread lightly’ and shown proper respect for the environment.”

He said the changes to the format of the competition were going to make this year’s competition much more technical and competitors were no doubt going to appreciate two key factors – the off-road capabilities of the Amarok bakkies and the special off-road Goodyear Wrangler tyres they are kitted out with for the third year in succession. Tyres play a key role in off-roading and Sarel said they performed “brilliantly” in the past two events.

“My relationship with Goodyear goes back to early racing days in the 1970s and we have been involved on the eco 4×4 side since 2000. I completely trust their Wranglers because I know the quality of their products is excellent.”