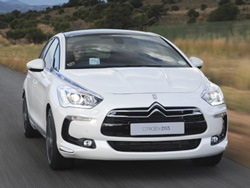 Citroën’s new ooh la la flagship DS5 has just strutted onto the local market and its stylish and controversial looks have already set the tongues wagging with the same enthusiasm as any latest haute couture unveiling in Paris.

This is the kind of car that demands a second look. And a third.

The French have a well-deserved reputation for flair and off-the-wall automotive ingenuity (remember the original DS way back in the ’60s?) which the South African motoring public have been experiencing again of late since the launch of the DS3 and DS4 over here.

Well, if you thought the previous two Citroëns broke the mould of uniformity, wait until you set eyes on the DS5. Glance at the pictures with this article and you will get a fair idea of what to expect, not that it does the car full justice.

When 16 of the new DS5’s were parked in the car park of a fancy restaurant in Port Elizabeth last week for the start of the local launch to the motoring media it sparked off quite a frenzy of photo-taking and a gathering of admirers who came to have a closer look.

Lights to make your eyeballs blister

And it certainly is the kind of car that demands a second look. And a third. Citroën reckons just on appearance it’s good enough to shake the cages of the likes of Audi, Mercedes and BMW and to lure buyers looking for something completely different in this class.

Whether that is wishful thinking depends on the market, although there is no doubt that the dare-to-be-different types might give it a cheque book nod of approval.

The DS5 has the sort of stop-and-stare styling, both on the outside and in the living quarters, that fans of the more traditional Teutonic are likely to frown upon. These include an oversized air intake, wide, chrome-plated grille, bling-bling chrome beading running from the tip of the headlamps to the front windows, diamond-effect 18-inch alloys, lighthouse bright LED lights at the front and rear, twin exhaust outlets integrated into the bumper, all of which are standard trim. There is even the option of smoked dark chrome trim.

Slip inside and it’s all black leather and chrome, space ship-like with hordes of dials, switches and gauges – including four speedometers, a wraparound dashboard and bold centrepiece console that houses the gear lever. Naturally there are plug-ins and connectivity features aplenty such as USB sockets for mobile devices and Bluetooth streaming via the car’s audio system.

Let there be lights… and there are

Cabin ambience is tastefully enhanced with gradually brightening LED lighting (once the driver is sufficiently au fait with the lay-out to find the starter button positioned below the clock), a pop-up heads-up display, the mix of red and white lighting to differentiate between the audio and navigation zones and the air conditioning consoles.

The living quarters are light and airy – and if you like chrome trim, you’ll be in heaven.

Critics might say the cabin is too over the top and the lay-out is not naturally intuitive but even on the relatively short launch drive we quickly got the hang of things, even the roof which is divided into three “wells of light”, each one of which can be covered individually to suit the occupants.

The cabin feels a tad confined, very much like the cock-pit of an aircraft and although it is comfortable and fairly spacious up front, the long-legged might find the space at the back a little confined. Citroën says five adults can be accommodated with ease but by this they probably mean five smaller-boned croissant chewers rather than five Blue Bulls supporters.

Where’s the handle, then?

The boot space stretches to 468 litres and access via the fifth door is convenient if you can overcome the fact that there is no key slot (or boot handle) on the outside which means fingers under the lip of the lid. Not so nice, particularly when madame snaps one of her carefully manicured nails in the process!

But the DS5 is a lot more than classy cabin and sexy looks. In spite of its rather high-ride stanch the car handles remarkably well, even at a brisk pace.

A better means to get at the storage area would have been nice.

The new DS5 range offers a choice of three engines – two turbocharged petrol engines and a Euro V-compliant diesel. The THP 155 petrol turbo (155kW and 240Nm) and HDi 160 diesels (120kW and 340Nm) are mated to a 6-speed automatic transmission, while the high output THP 200 (147kW of power and 275Nm of torque) is mated to the 6-speed manual gearbox.

The range is then divided into two Style variants (THP 155 automatic and THP 200 manual) and two Sport derivatives (THP 200 manual and HDi 160 automatic).

On the launch drive betweenPort Elizabethand Humansdorp (with plenty of side-tracking on to winding back roads) I drove the automatic diesel and the manual petrol models and both cars impressed with their solid on-the-road feel and confident handling.

In spite of its tall profile both models showed little tendency towards body roll or pitch and the acceleration of the petrol version, in particular, was much friskier than expected. The six-speed manual worked very well and even in top gear at low speeds the torque was sufficient to get it up and running.

The oil-burner somehow felt a little more planted, probably because of the heavier engine and although it was not quite as quick off the mark it galloped along with more than enough enthusiasm to keep diesel fans happy.

Simple layout, and easy to read.

Another impressive feature of the DS5 is its well-insulted cabin which Citroën says is because of generous application of sound-deadening applied to the body and opening panels, inside the engine compartment and on the panel between the engine and the cabin.

One area where the DS5 disappointed was in the suspension which was noticeably harsh, clearly more suited to French motorways thanSouth Africa’s deteriorating roads. The BMW 3 Series, which Citroën targets as opposition, also has a taut ride, but even its run-flat progress is less thumping than that of the Citroën.

Some nice-to-haves for you

The suspension on both the Merc and Audi are also noticeably better than that of Citroën’s flagship. But on the flipside the DS5 has a wide range of fancies that often come as optional extras with the Drei Teutonic Wagen….. nice-to-haves such as intelligent traction control, full colour heads-up display and reverse parking camera.

Our petrol launch vehicle was fitted with an optional extra lane departure warning system that vibrates under your bum when you venture to far left or right. (Perhaps this should be obligatory in this country where cell phones seem to be permanently glued to driver ears. Ever noticed how much they – the drivers, that is – weave from side to side while chatting and waving their hands about?).

The DS5 is a startling newcomer, very different from the norm, with plenty of cool features, solid build, comfortable cabin and frisky drive, but with its few French quirks, harsh ride and low brand resale value it is not likely to give the Big Three sleepless nights.

The models and prices are: