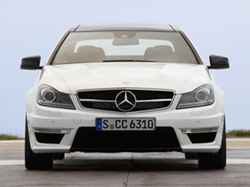 In this day and age of impersonal “likes” and distant Facebook “friends”, light beer, political correctness and over-enthusiastic environment prophets it is a real treat to come across something real for a change – a car that loves to rip off its Ralph Lauren Blue Label suit and to slip on a pair of tatty jeans and T-shirt to party big time.

Looks and power in one package.

What makes this particular car even more impressive is that it hails from a blue-blooded family of aristocrats called Mercedes-Benz, a namegenerally associated more with solid family sedans than tar scarring racers.

But then the car we are talking about here is one of the German family’s wild-child offspring because it wears tattoos that say C-Class Coupé C63 AMG. Now just in case you don’t have high octane in your veins or prefer to beer talk Malema instead of cars, allow me to enlighten you: 6.3 stands for a 6208cc chunk of engine, high-tuned to deliver a mammoth 336kW and 600Nm which is enough gunpowder to blast this sexy coupe from zero to 100km/h in a just 4.4!… which is quicker than all hatches and most other cars on the road, including one or two super sportscars.

Awesome – whichever way you do it

But the progress is not only rapid, it is also amazingly smooth, thanks to the Merc’s 7G-Tronic PLUS transmission which literally flips through the cogs, either left in auto or when the driver flicks the flappies on the steering wheel.

Left in “normal” mode the coupé is already awesome off the mark. Click it into Sport or Sport + and everything is multiplied: the car crouches lower on the tar, the engine takes on an even deeper growl, the steering becomes quicker and heavier and the shifts happen at lighting speed. To make the journey even nicer it down-shifts, even in automatic, with a goose flesh growl.

This certainly isn’t one of the American-style “all horses and no cling in the corners” cars either. It loves to be flung into a corner and it will maintain its dignity line longer than the point where even enthusiastic drivers start running out of experience.

In a nutshell, this one helluva car to drive. Even with the speedo needle flickering deep into the three-digit zone the coupé feels as though it is nowhere near running out of steam, even though it is electronically governed to top out at 250km/h.

Maybe even the polar bears will smile at this fine piece of German engineering.

Yes, most owners would buy this coupé for its brutal, road-legal power but it certainly also has the kind of supermodel looks which means it cannot be parked anywhere without attracting admiring glances. It’s sloping shape makes it one of the classiest coupés on the road and the fat low profile rubbers wrapped in race-style alloys, four handsome red and black Recaro seats, long wide bonnet and four big-mouth bazooka exhaust outlets just round it all off in true track style.

I drove this Merc when it was introduced to the Media at Zwartkops raceway a few months ago and immediately fell for its charms. This time round I spent a week exploring the Cape Winelands and Boland mountain passes in it and although it is a very difficult thing to do I occasionally had to drive it sedately through towns, suburbs and built-up areas and it’s certainly smooth and creamy in congested traffic. It could be a fantastic daily commuter if you have lots of willpower and an unleaded right foot.

The living quarters are decked out wall-to-wall with every bit of electronic and connectivity wizardry.

The cabin is amazingly comfortable and the ride, in spite of the car’s sporty character, is firm without being harsh or thumping, even at pace. Naturally it’s not quiet. No V8 should ever be made to suffer the humility of sounding like a muffled Japanese kitchen utensil on wheels and this big V8 is certainly not shy to roar with thunderous enthusiasm.

So classy, so comfortable – you just want to stay there.

The living quarters are classy and amazingly comfortable. The seats wrap themselves around the occupants and the whole cabin is a space that is so enveloping that you don’t want to leave, even after the engine has been turned off.

Most owners would buy this coupé for its brutal, road-legal power but it certainly also has supermodel looks.

It goes without saying that this über-coupé is decked out wall-to-wall with every bit of electronic and connectivity wizardry, safety features and driver aids, super aircon, heated front seats, intelligent lights, Parktronic, a pre-safe system that offers quicker response and increased occupant protection, cruise control (an essential if you want to avoid regularly sharing uncomfortable crowded cells with gangstas and other dubious characters), a multi-faceted Media interface, more airbags than in Parliament, deadly ABS brakes with brake assist, a 3-stage ESP and lots more.

Now for the money matters

What’s more, if you still have money to burn after forking out the R923 680 this baby will cost you in standard format, you can splash out another cool R118 500 to dress it up further with AMG 19-inch rims, an AMG performance trim package, a limited slip differential and a lane tracking package.

Maybe even the polar bears will smile at this fine piece of German engineering because Mercedes-Benz says its fuel consumption can be kept down to just 12 litres/100km if driven sedately along a combination of city and country roads while emitting only 280g/km of stinky-poo gas.

But here is the challenge, Mercedes: find me a man or woman anywhere in the world who would want to drive this car in funeral procession fashion. It just cannot be done. Certainly not for longer than three minutes – and that’s pushing it.