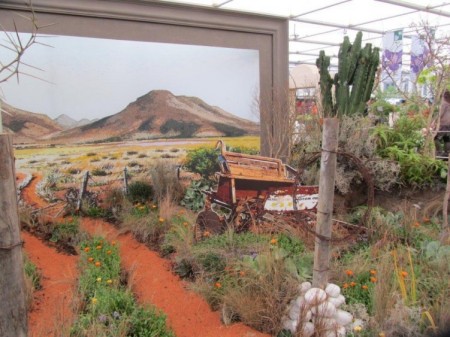 Themed Gateways – a botanical journey the exhibit combines nature and our cultural diversity to create an intriguing combination of rich botanical biodiversity and iconic architectural elements offering glimpses into the land in which we live. 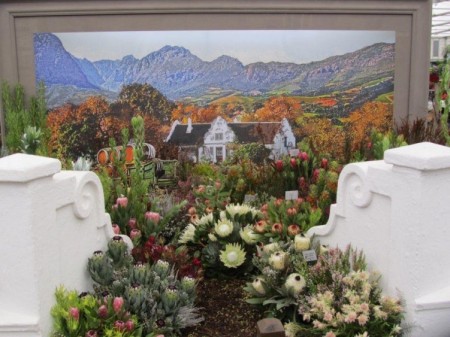 Designers David Davidson and Ray Hudson have been creating these designs for 19 years of the 37 years that we have exhibited at the CFS.  Their innovative displays have always been one of the highlights of the show and this year has proved no exception. 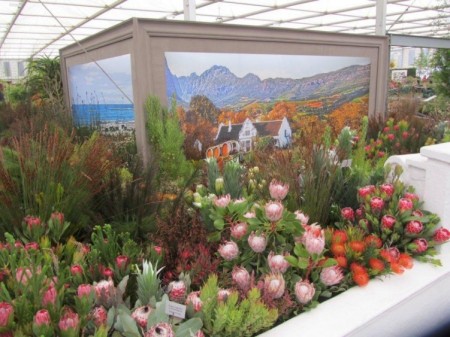 The 2012 Kirstenbosch-SA exhibit is rather like the diary of a traveller; the visitor is taken on a journey through changing botanical and cultural landscapes which show our unique flora against the backdrop of watercolour paintings of picturesque locations. 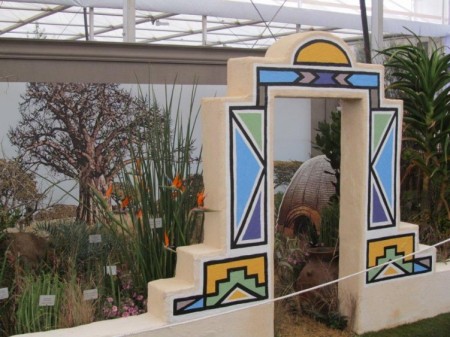 Attractions of the south-western Cape coast and interior (Fynbos biome) extending intoNamaqualandand the semi-aridKaroo(Succulent Karoo biome) and onward to the northern provinces ofKwaZulu-NatalandMpumalanga(Grassland biome) allow the visitor to experience the many fascinating species that thrive within the varying climates. 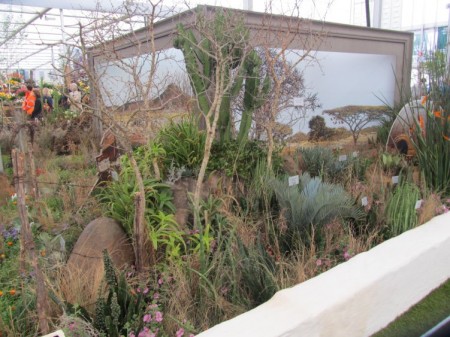 Complementary cut-outs set the scene – a gracious Cape Dutch Manor House here, a fisherman’s cottage there, a roughKaroofarm track, a windmill, an Ndebele (traditional tribal design) archway. The low perimeter wall on each side features a typical architectural gateway providing a ‘sense of arrival’ at each destination. 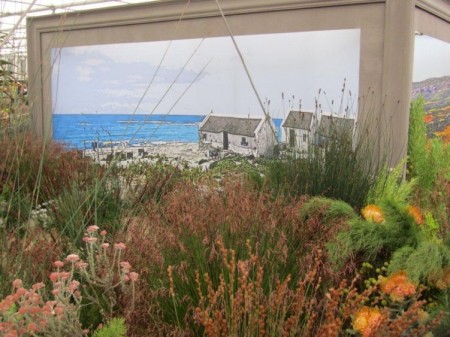 The hardworking team raced to put the finishing touches to the display after some of the most interesting aloes were held up following a permit delay. The Madiba protea was exhibited for the first time adding additional interest. But the long hours of preparation in this united team of designers, SANBI members and volunteers proved well worth the effort.

With sponsor, SA Gold Coin Exchange and Scoin shops, the jubilant team can now enjoy showing the proud exhibit to the many visitors who flock to the show which runs from 22 to 26 May.

“Our exhibit is always a popular destination for show visitors and this year by taking them on a journey across the country they get the sense of how each location has its own iconic attractions” said designers David Davidson and Ray Hudson. “It must also be remembered that while many countries exhibiting show spring flowers we are in our winter cycle so our display is significantly different. This in itself is a motivation to visit our country and experience the diversity of our seasons, landscapes and cultures. We have already had a visit from Sir Cliff Richard who was most interested in the exhibit, having performed at Kirstenbosch some years ago.”

Sponsoring for the second year, Alan Demby of the SA Gold Coin Exchange and Scoin shops said that he was enormously proud of the work and dedication of the team.

“We are a golden country and the synergies between our floral heritage and the gold coins and medallions we produce are many. We will be launching a limited edition Gold Mandela medallion featuring the portrait of Mandela on the obverse and the Kirstenbosch Mandela’s Gold Strelitzia on the reverse. Our talented designers will each be given one of the medallions in recognition of their award.”

“The Protea series which was first minted in 1986 is enormously popular, as is the ten years of democracy commemorative Gold Coin that features Nelson Mandela on the obverse and the king protea on the reverse.  The living legacy of our floral landscape reproduced on the coins combined with the icons of our country is a powerful reason for people to own a small piece of our golden heritage and to visit the country.” he said.

Dr Tanya Abrahamse, CEO of the South African National Biodiversity Institute (SANBI) was equally delighted to hear that we were bringing back gold yet again.

“Once again our team has done us proud! Our biodiversity is an extremely valuable national asset.  Biodiversity is the extraordinary variety of life, such as plants, animals and insects that are the foundation of ecosystems which provide people with numerous benefits. From ecosystems we derive essential goods and services, such as food, water grazing, pollination, fish and medicines and we embrace the opportunityChelseaaffords us to highlight the importance of these natural resources.”

The featured areas show the gateway toAfrica, the Cape Floristic Region of the south-westernCape, with its bounty of the ever-popular protea family. The display includes as wide an array of fynbos species as possible – depending on flowering times and availability. Featured will be many members of the Proteaceae – numerous protea species as well as cultivars and new hybrids, leucadendrons (cone bushes), leucospermums (pincushions) if available, Pagoda plants (Mimetes) and serrurias (Blushing Bride).

Other important components of the fynbos community are also featured, such as brunias, heaths (Erica), restios and ‘slangbos’ (Stoebe), together with numerous perennial and annual species – many familiar to English gardeners – such as Nemesia, Lobelia, Osteospermum, Helichrysum, Felicia, Arctotis and Gazania, and a variety of bulb species.

The Succulent Karoo scene features vegetation typical of the more arid parts of the country including many succulent and aloe species. Firing the imagination the backdrop is the perfect frame for this region. The vegetation is dominated by dwarf, succulent shrubs, of which the vygies (Mesembryanthemaceae) and stonecrops (Crassulaceae) are particularly prominent. Succulent plant species with thick, fleshy leaves are plentiful here, the diversity of which is unparalleled anywhere else in the world for an arid area of this size.

The Grassland is a complex ecosystem, including rivers and wetlands, where only one in six plant species are actually grasses, with the bulk being bulbous plants such as arum lilies, orchids, red-hot pokers, watsonias, gladioli and ground orchids. The Grassland Biome has an extremely high biodiversity, second only to the Fynbos Biome. Rare plants are often found in the grasslands, especially in the escarpment area. The scenic splendour of the escarpment region attracts many tourists.

Over the past 36 years the SA exhibit has notched up 31 Gold medals, two Silver-Gilt medals and three Silver medals, as well as numerous other special awards for outstanding contributions, including the Lawrence Medal in 2006 for the ‘Best Exhibit shown to the Society’ in that year and was the first recipient of the new ‘President’s Most Creative Award’ in 2008.

The display is project managed by Sarah Struys, Events Manager at Kirstenbosch with the designers and a team from SANBI: Alison Pekeur, Kuphumla Zenze from Kirstenbosch and Mondisa Kondlo from Walter Sisulu National Botanical Garden in Johannesburg. Enthusiastic volunteers from South Africa make their way to London to assist making the exhibit a truly passionate South African project.www.sanbi.org