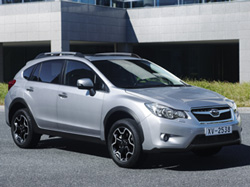 House husbands have become a common phenomena ever since international belt-tightening sparked off job losses and unemployment with more and more men forced to work from home and take on school run duties, household chores and don aprons while their wives stuffed their iPads and fancy phones into their Gucci bags and headed off to their executive jobs to earn the household’s main income.

The XV has the tough guy stanch and attitude that hints at more muscle than it packs.
Things changed. Men started meeting at coffee bars to swap recipes and shopping tips instead of meeting in the pub, telling bawdy jokes and watching rugby on the box. While golf clubs rusted in the garage they had to acquire a whole string of new skills such as becoming intimately acquainted with internet search engines to steer school projects in the right direction, learning about wash cycles, school lunches, Hoover bags and steam irons.

Hence the birth of the gentle house-husband. Into the charity/re-cycle bags went their favourite tatty, baggy old jeans, stained T shirts and clod hoppers. No more unshaven chins were allowed and into the skip went his favourite comfortable old TV chair…these simply didn’t go with aprons, rubber gloves or recipe books. Naturally this caused more than a modicum of confusion in the minds of the species from Mars who no longer seemed sure about where they fit in and what sort of role exactly they are supposed to be playing in the family set-up.

Will the real XV please stand up
Which leads me neatly to the new Subaru XV – which also seems to suffer from some form of identity crisis. It doesn’t have the versatility and performance of a Forester, nor the space and charm of the Tribeca. It most definitely doesn’t have the raw animal appeal of the WRX, nor the competitive edge and grunt of the Outback or the Legacy.
Like all Subaru’s, its all-wheel cling is sure to delight as much on gravel as it does on tar.
But hang on – it seems to have the same four-cylinder engine as the Legacy which grinds out an underwhelming 110kw and 196Nm… only the Legacy does the 0-100km/h sprint a bit faster, possibly because it is not carrying a high-ride body such as the XV. At 210km/h it is also faster than the 187km/h of the XV.

Many people thought the XV was going to be the new generation Forester, moving it further away from its station wagon heritage to something more of an SUV. Up to a point this is what has happened, although the XV is not a Forester at all. Not even close to it; certainly not when it comes to muscle.

OK, so you do look pretty good
What the XV does have is eye-candy. It has the tough guy stanch and attitude that hints at more muscle than it packs. Particularly impressive are its big silver matt silver and black rims and sloping roof-line. Yet the XV also has more than a hint of urban smoothness and the kind of classy smartness that will undoubtedly appeal to the trendier, cool-chic end of the market at which it is aimed.

The living quarters are elegant (our test car was fitted with optional leather seats) and impressive and there is an aura of good quality all round. The cabin is airy and spacious (although the boot is not all that generous) and the seats are a good match for the Subaru’s gliding ride.
The living quarters – there’s an air of quality about them.
I didn’t have the opportunity to test the car’s grip on gravel, but like all Subaru’s, its all-wheel cling is sure to delight as much on gravel as it does on tar. Not that the XV is intended to be a dirt-tracker or rock climber. Its market is clearly the slick suburban smoothies who will probably treat it to a car wash and polish once a week to remove even the tiniest vestige of dirt or dust.

Hmmmmm…
There are talks of a more powerful XV heading this way and it might be worth the wait. There are two models (both powered by the same engine) on the local market at the moment, a six-speed manual option and a (rather old-fashioned) four-speed CVT with which our test car was fitted.

I have never really been a fan of droning CVT transmissions and it certainly didn’t do it for me on this car. On the run out of Hout Bay up the famous Suikerbossie Hill towards Llandudno the CVT hummed and then hummed louder, seemingly unsure which setting it preferred.

The engine tends to growl quite noticeably at times, almost as though it was getting a bit teed off with the transmission’s indecisions. Playing with flappies on the steering-wheel didn’t improve matters much.
Room for the family, but perhaps not quite the kitchen sink as well.
The steering is pleasantly responsive, true to what Subaru owners and fans have become accustomed to from a brand that made its name in racing and rallying back in the naughty nineties when driving fast was fashionable.

I have always associated Subaru with good grip and grunt, even a touch of aggro – none of which is present in the new XV. Put foot and it will cling through the corners almost in true super-glue Subaru fashion, but overall the XV lacks the vroom-vroom and personality that has given the brand its very special own kind of magic.

On paper, fuel consumption and emissions figures are impressive so clearly the XV is the brand’s contribution to the growing new environment-friendly world…..and Subaru’s very own polished city slicker, urban man, home husband will no doubt make the tree-huggers happy.

The new XV models and prices are: