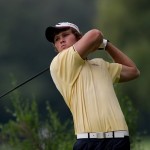 BARASSIE, Scotland (2 June 2012) – South Africa’s Haydn Porteous took full advantage of gloriously sunny conditions on the Scottish west coast lay down an early marker at the Carrick Neill Scottish Stroke Play Championship. In an opening round that featured two eagles, the reigning SA Stroke Play champion fired an eight-under-par 65 to open up a two stroke lead on the field at Kilmarnock.

Porteous has a two shot cushion on Australian Brett Drewitt and Frenchmen Clement Berardo and Adrien Monnier, while Ross Bell flew the flag forScotlandwith a 68.

Clearly enjoying the windless day at the links, the 17-year-old Modderfontein golfer got off to a flying start with an eagle the par-five first hole. He birdied the second and fourth holes and wiped out a bogey at the seventh with a birdie at the next hole. After another birdie at the 12th, he parred his way to the 15th, eagled the 16th and birdied the 17th to set the target for day one.

It was Porteous’ fourth competitive round inScotlandand the third time he has shot 65.

“Two years ago I finished in fourth place in the Scottish Under-16s Championship at Auchterarder after rounds of 65, 81 and 65, but the wind blew in the second round,” he said. “It would be nice to win here, but it’s early days. I need to keep it going now.”

Porteous, who arrived with the rest of the South African squad inScotlandfour days ago, said the good weather was a definite plus.

“We have only had one day of rain. The weather was better than I expected today and to play links golf in good conditions makes it easier.”

Fifty-seven players in the field of 155 managed to break par on day one, but the leaderboard had a distinctly international flavour. The forecast for round two is calling for overcast weather and a fresh wind on Saturday, which may help the local contingent to close the gap on the visitors before the cut is made to 40 and ties for the 36-hole final round on Sunday.

SA Scores – Round One: