Riekus Nortje broke records when he won the Sunshine Big Easy Tour Benoni event, marking the first time a single player has won two events — and he won them back-to-back. 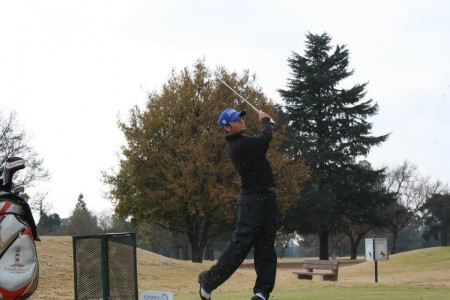 “I’m having a bit of a ball at the moment. It’s a great feeling — I don’t think I’ve ever felt like this in my life before. This definitely means a lot, and I don’t think this will be the last time this will happen,” he said.

The Fancourt Foundation graduate clocked up a six-under-par tally over his 36 holes at Benoni Country Club, claiming a one-stroke victory in the R100 000 tournament presented by Stonehage.

Currently in his rookie year, the 21-year-old explained that his confidence has been much better since his maiden career victory at ERPM Golf Club three weeks ago. He headed to Big Easy Benoni on the back of a share of 22nd at the Indo Zambia Bank Zambia Open, which was easily his best finish on the main tour this year.

“I’m sure I’ll realise what I’ve done once I get home tonight,” he said. “This really is something, but I’ll just keep on doing what I’m doing and play with the same confidence. It doesn’t change me as a person, but it’s definitely doing a lot for the way I play.”

And playing out of Fancourt certainly helped him in incredibly windy conditions on Friday. “I dealt with the wind pretty well. All-in-all I hit a lot of greens and playing the wind was definitely an advantage for me. I’ve done well in quite a few tournaments where the wind has blown,” he said.

Having represented South Africa nine times as an amateur, and now with two victories under his belt, the sky really seems to be the limit for Nortje.

“My game is on the up. There’s always a couple of things you can work on, but my game feels good at the moment. This is a great platform to build on your golf, and it’s working for me at the moment,” he said.

Divan Gerber reached the 18th tee-box with a two-stroke lead, but from there things went downhill. A wayward tee shot found water on the left, and after dropping he took a fairway wood for the green, but once again failed to clear the water, which meant he would play into the green for five. He eventually made nine at the hole, finishing third at four-under-par.

Teboho Sefatsa claimed second after shooting a second-round 69. He rose to the occasion on Friday, making his way through the stretch in 33, which included birdies at 16 and 18. Having shot 70 on Thursday, Sefatsa cruised to a confident second-place finish.