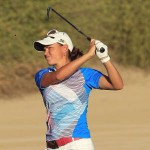 The entries for the South African Women’s Open have officially closed, and the country’s oldest women’s professional tournament has drawn a strong international field of players from 20 countries.

Australia’s Lindsey Wright heads to South Africa as a campaigner on the LPGA Tour for the past eight years and a winner on the Ladies European Tour in February this year.

South Africa will be represented by 15 Women’s Professional Golf Association professionals and six leading amateurs.  And two Indian professionals will tee it up in the SA Women’s Open for the first time in Sharmila Nicolett and Smriti Mehra.

The international challenge is strengthened by the fact that most of the field will head to South Africa on the back of the US Women’s Open being played the week before.

“I know a lot of the players are looking forward to coming to South Africa,” said Wright, who in 2009 had two top-five finishes in the majors of second on the LPGA Championship and fourth in the Kraft Nabisco Championship.

“It’s exciting to play in a tournament that’s back on the international schedule after a long break, and with the calibre of South African golfers coming out on Tour now, it’s going to be fun. It’s also a really strong field with some top European players like Becky Brewerton and Gwladys Nocera, who have won a bunch of times. And of course Lee-Anne Pace has won five times.”

Pace is also excited at the prospect at taking on some of the world’s top women professionals on home soil.

“It’s going to be an amazing experience coming back to South Africa and playing in front of my home crowd. All the South Africans want to win this one, and I know for me it would be one of the most exciting and more special wins of my career,” she said.

The field will compete for a total purse of R2.7 million in an event that will be co-sanctioned by the LET and the Women’s Professional Golf Association of South Africa.

ABOUT THE SA WOMEN’S OPEN

The SA Women’s Open is the premier tournament on the South African women’s professional golf calendar, dating back to 1988.
It is a 54-hole stroke play professional tournament co-sanctioned by the Women’s Professional Golf Association of South Africa and the Ladies European Tour, with World Sports Promotions as the commercial rights owners.

The 2012 tournament will be played over 54 holes at Selborne Park Golf Club in KwaZulu-Natal, with the leading South African professionals competing against an international field for total prize money of €260 000.00. The field will consist of 84 players.